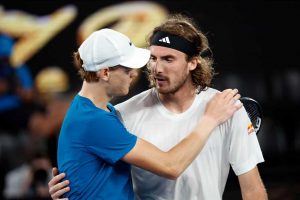 Stefanos Tsitsipas, right, consoles Jannik Sinner at the net after his victory in Melbourne

The only way to explain this wild Australian Open match is that everything after the second set was different to before. The sun set over Rod Laver Arena, Jannik Sinner went off for a bathroom break, and when he returned he was another player. Suddenly he was lithe and alive, a 6ft 3in spider scuttling up to the net to administer deadly, delicate drop shots. On the other side Stefanos Tsitsipas’s shoulders slumped, the legs grew heavy, and his once-pristine hair flopped over an increasingly furrowed brow.

Tsitsipas had won the first two sets with a clinical touch worthy of the No 3 seed. He had already beaten his 21-year-old opponent in four matches of their five, including a quarter-final in Melbourne last year which was done and dusted in three quick sets, and here was another destined for the win column. But then the momentum swung, the many Greek fans grew anxious, and so did Tsitsipas. Sinner dominated the third set, eked out the fourth, and forced a fifth.

The decider initially swung to and fro. On serve at 2-1, Tsitsipas engineered three break points, then lost them all. When he did it again a few minutes later, he lost two more and it seemed like Sinner had become indestructible. But the Italian hit long to finally give up his serve, and he never quite recovered. From then on the only thing that interrupted Tsitsipas’s smooth progress to the quarter-finals was a bug on the court, halted gingerly by Sinner, and after exactly four hours Tsitsipas unleashed a crosscourt forehand to win 6-4, 6-4, 3-6, 4-6, 6-3.

“It felt like an entire century on this court,” a smiling Tsitsipas said on court. “What a great night. That was a ripper, as they say here.” 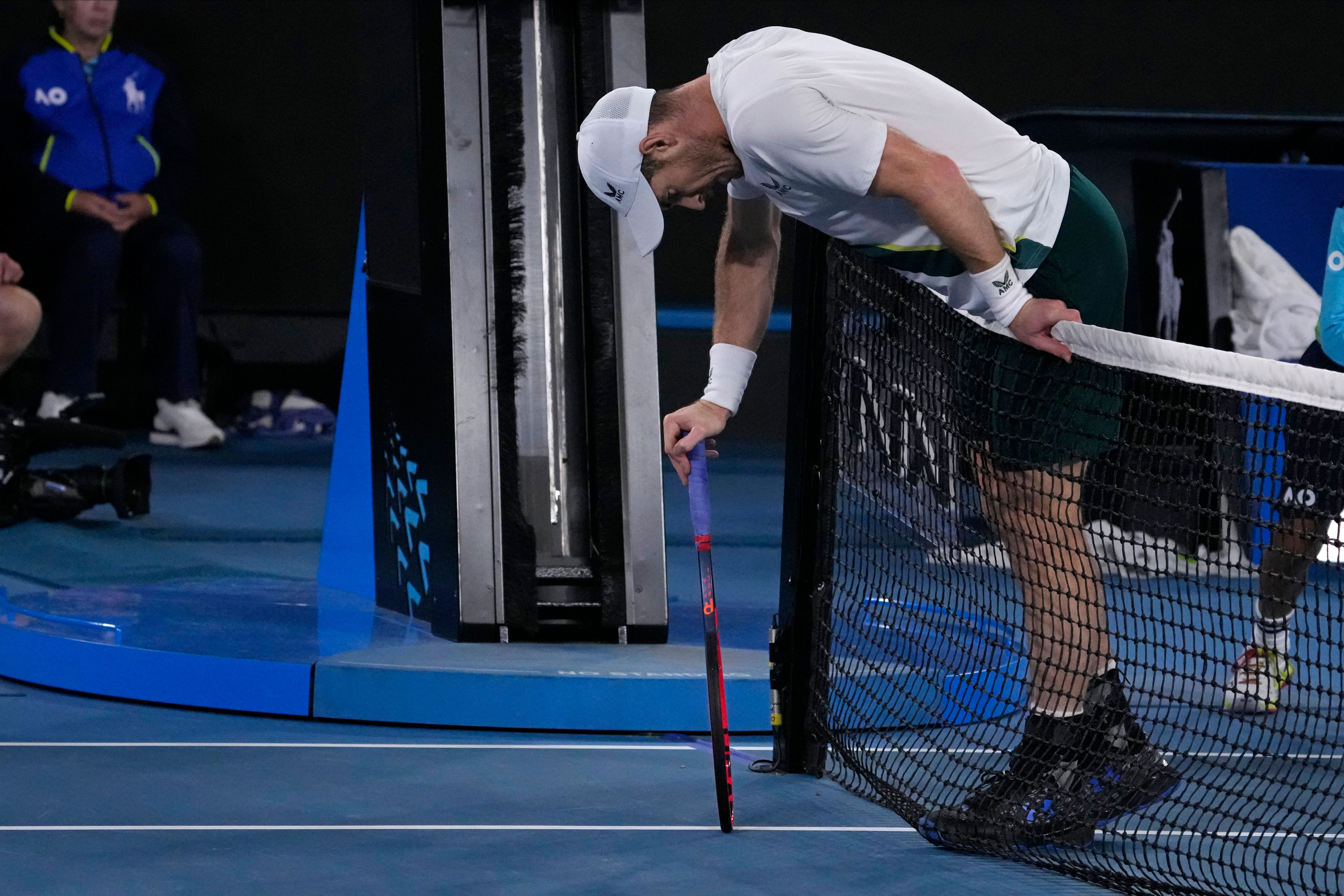 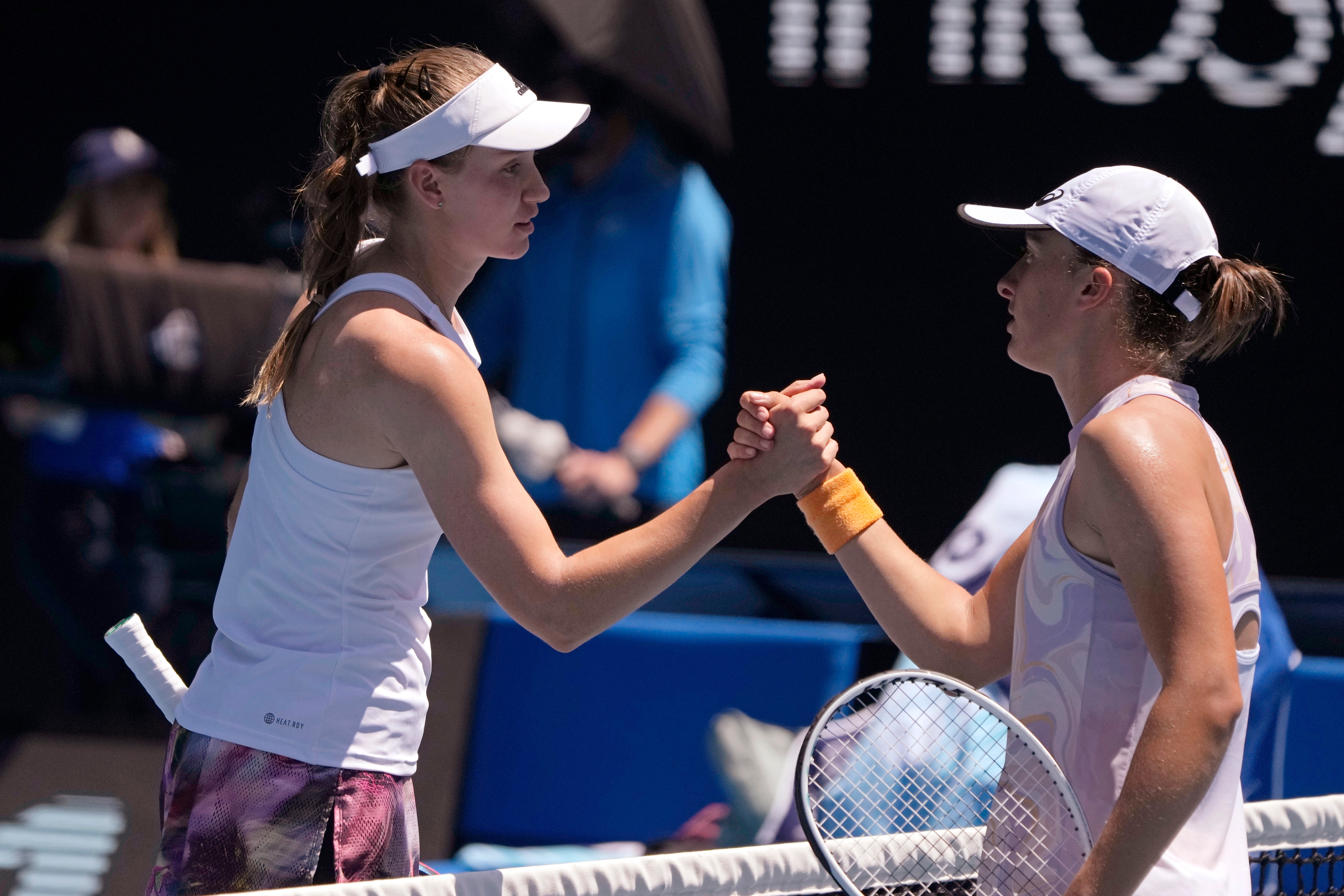 How did he turn the tide back his way in the fifth? “I released my arm a little bit, released my wrist on the serve, and that helped me generate more power and accuracy, something I wasn’t doing before. It completely changed the way I approached the match when I did this minor adjustment, and that helped me serve it out without being too tense. So I owe that fifth set to figuring it out.” 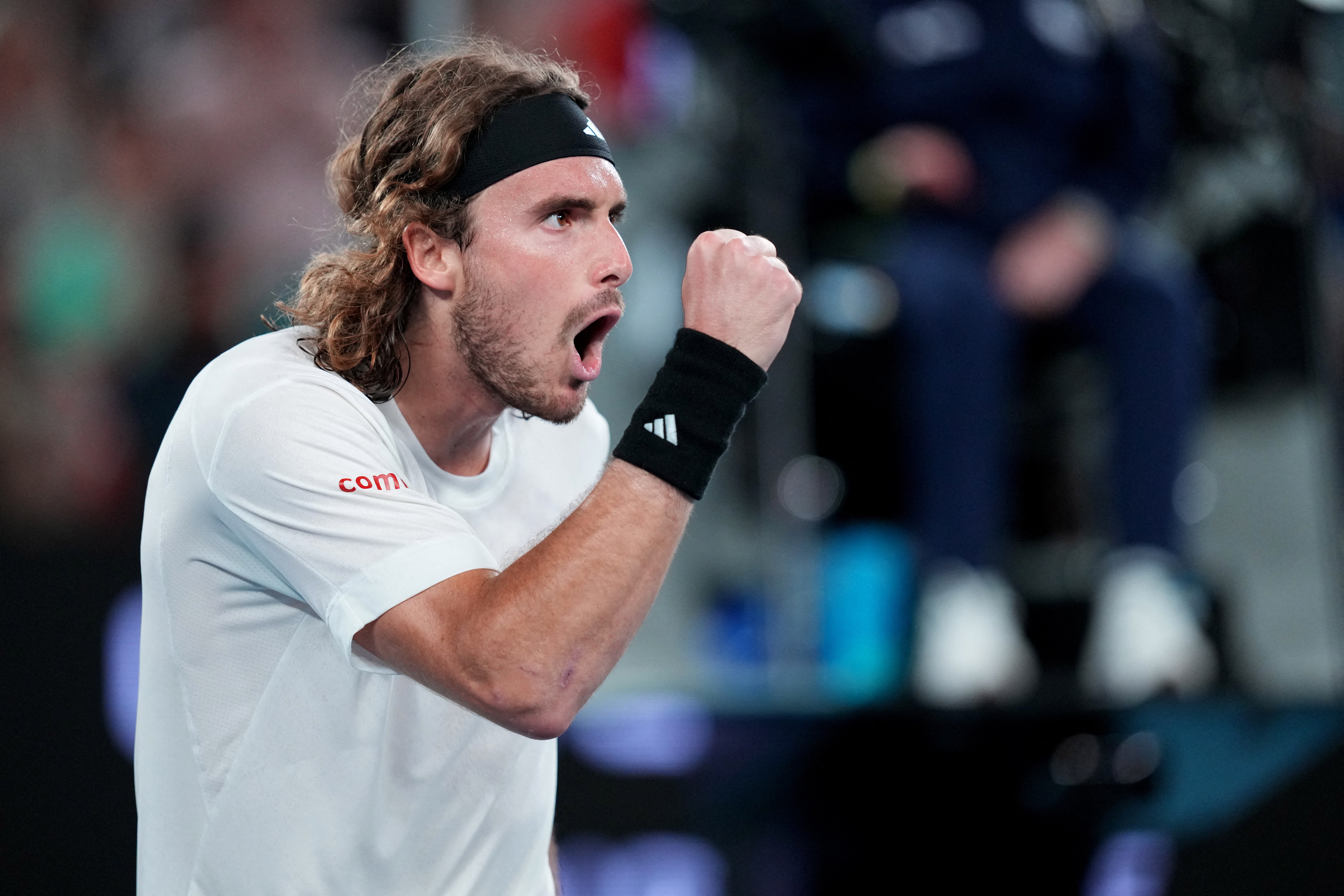 Tsitsipas is through to the quarter-finals

Tsitsipas had immediately taken control of the beginning of the match, breaking a shaky Sinner in the opening game and looking every inch the favourite to reach the final from the top half of the draw, one thinned out by the exits of Rafael Nadal and Casper Ruud. Sinner broke back to make it 4-4 but Tsitsipas responded immediately with another break of his own, and the Greek closed out the first set 6-4 with a forehand winner on the run.

The second set followed a similar pattern: an early Tsitsipas break, a break back by Sinner midway through, before Tsitsipas broke at 4-4, reaching on the stretch and firing a crosscourt winner, displaying his phenomenal wingspan and knack of retrieving impossible balls on the slide. Tsitsipas served out the second set to lead 6-4, 6-4, and as Sinner walked off court, head dropped, his demise felt inevitable.

But tennis is a strange game, one at the behest of invisible forces, and this Melbourne crowd were treated to an entirely different match under the evening lights. Sinner mixed up his game with drop shots full of guile, powerful forehands and a relentlessly accurate first serve finding its target nearly 80 per cent of the time. 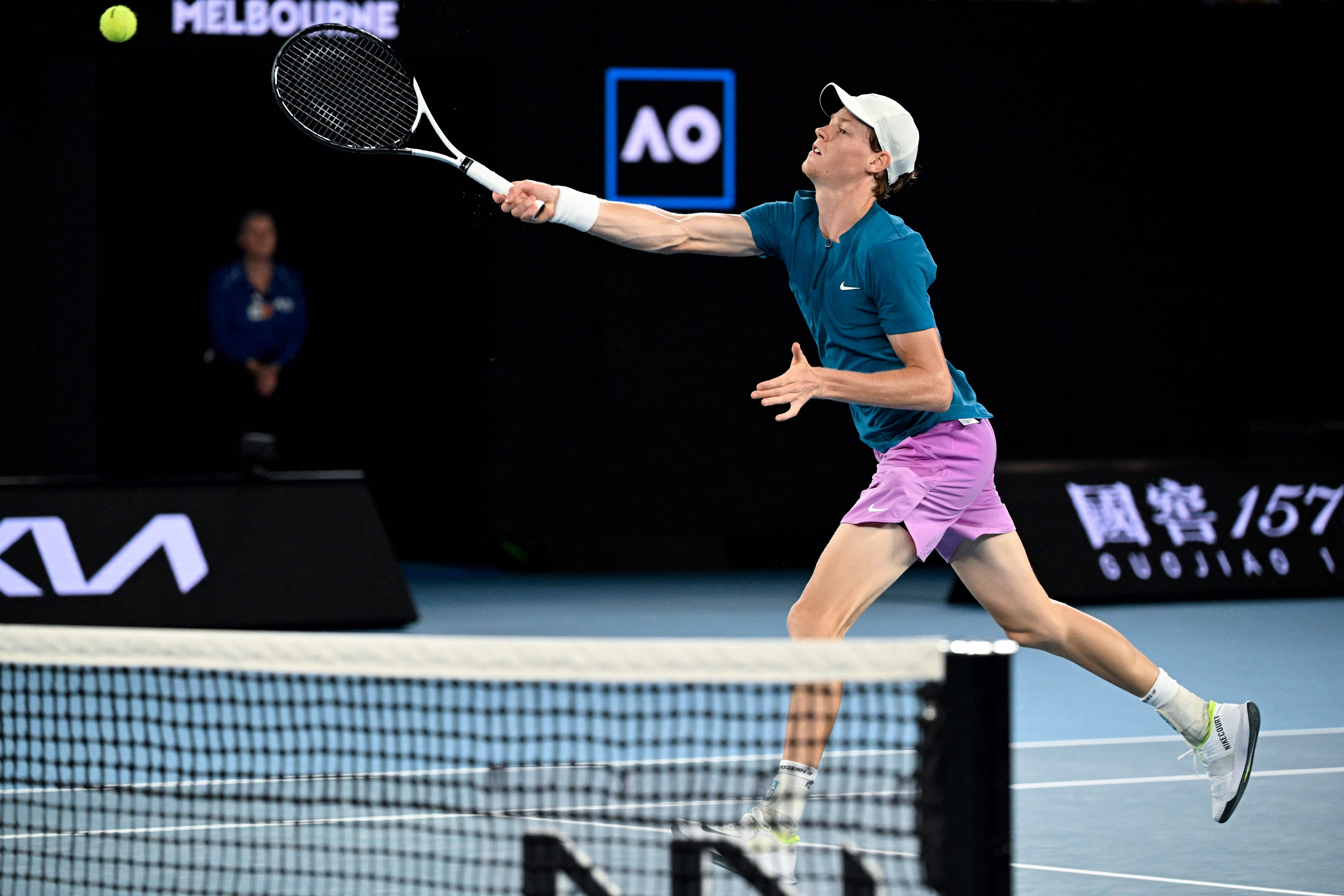 Jannik Sinner reaches for a volley at the net

The shift seemed to disturb Tsitsipas, who tried to respond with drop shots of his own but they were often ambitious and usually careless, followed by a disconsolate roll of the eyes before the ball had floated into the net. Sinner closed out the final game of the fourth set with two aces and another couple of monstrous serves to set up a fifth, and the destination of this match was anyone’s guess.

But Tsitsipas stayed composed. The adjustment that he later explained, “releasing” his wrist, made a huge impact as his first serve jumped to 92 per cent accuracy. By contrast, Sinner’s serve fell off a cliff, and so it was all the more impressive that he managed to save the first five break points of that deciding set before eventually succumbing. The Italian has reached the quarter-final of every slam but no further, yet even in defeat this match was more evidence of a glorious career ahead.

At 24, Tsitsipas is further along his tennis journey. He has made the semi-final of the Australian Open three times and has an inviting route to go all the way this year, though no one is going to roll aside. He will play another talented 21-year-old in the next round, the unseeded Czech Jiri Lehecka, who earlier toppled sixth seed Felix Auger-Aliassime 4-6, 6-3, 7-6(2), 7-6(3). But for now, Tsitsipas’s dream of winning a first grand slam remains alive and well in Melbourne.

Top seed Iga Swiatek was bundled out of the Australian Open fourth round, with title threat Coco Gauff also exiting in tears, as a pair of underestimated grand slam champions tore open the women’s draw.

World No 1 Swiatek was sent packing by Elena Rybakina in the early match at Rod Laver Arena, the Pole falling 6-4, 6-4 to the Kazak Wimbledon winner who started her tournament in the Melbourne Park wilderness of Court 13. Rybakina shrugged off the scheduling snub before the fourth-round showdown but used it as fuel in her first appearance on centre court as a tightly wound Swiatek slowly unravelled.

“I felt the pressure, and I felt that I don’t want to lose instead of I want to win,” said Swiatek, who dominated last season with two Grand Slam wins. “I felt like I took a step back in terms of how I approach these tournaments, and I maybe wanted it a little bit too hard.”

The result means this year’s Australian Open will be the first grand slam tournament in the open era where the top two seeds in both the men’s and women’s singles draws have lost prior to the quarter-finals.

Rybakina, the 22nd seed, might have expected to face Gauff in the quarter-finals but the much-hyped American teenager was upset 7-5 6-3 by Jelena Ostapenko, the forgotten Grand Slam winner of women’s tennis.

The 2017 French Open champion thrashed 30 winners past Gauff on Margaret Court Arena, her last two sealing the match in style to leave the 18-year-old in tears at her post-match media conference.

“I feel like it was rough,” Gauff told reporters, before breaking down with emotion. “When you play a player like her and she plays really well, it’s like, you know, there’s nothing you can do.”

The win secured a first Australian Open quarter-final for hard-hitting Ostapenko, as well as the first at a grand slam since her run to the Wimbledon semi-finals in 2018. Latvia’s first – and only – slam champion stunned the world when she hoisted the trophy at Roland Garros as an unseeded 20-year-old.

She has had mostly lean years since but never doubted she would return to the spotlight again.

“My life changed a lot (after the 2017 French Open), so I needed a few years to really get used to what happened because I was really young,” she said. “I always knew and believed in my game. If I play well, I can beat almost anyone.”

Big things have been expected of Sebastian Korda for some time and the young American is finally delivering on expectations at Melbourne Park. 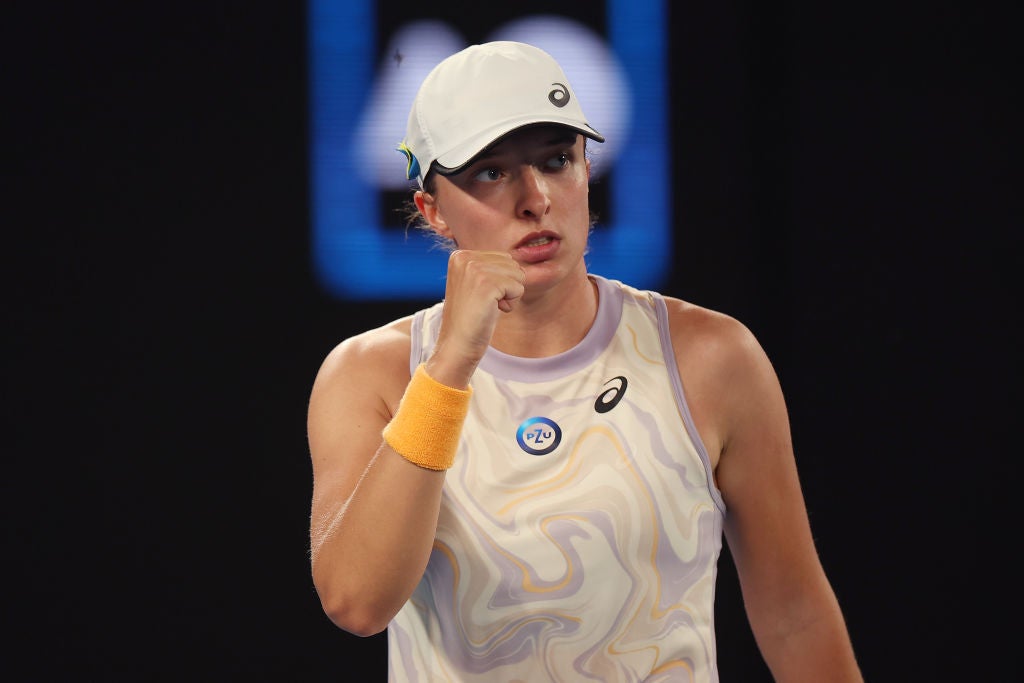 He took another step towards emulating his Australian Open-winning father Petr by booking his first Grand Slam quarter-final with a see-sawing 3-6, 6-3, 6-2, 1-6, 7-6, (7) win over Hubert Hurkacz at Rod Laver Arena.