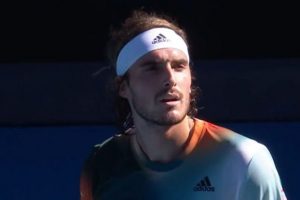 Stefanos Tsitsipas was left perplexed at the Australian Open after being given a coaching violation during his third round match against Benoit Paire. Despite his confusion, the Greek was handed a swift telling off by umpire Marijana Veljovic who had warned him earlier in the match.

It was another relatively tough assignment for Tsitsipas on Saturday, who has not had it all his own way en route to the fourth round.

A straight-sets win over Mikael Ymer kicked off his tournament, but since then, he has been taken to four sets by consecutive unseeded opponents.

On Thursday, Argentine Sebastian Baez made the 23-year-old work for his win, and the same can be said for Paire on Saturday.

It was not just conventional difficulties faced by Tsitsipas either, with the youngster seeming to feel as though he was being given a hard time by the umpire.

After Paire hit a shot long during the second set, Tsitsipas appeared to mutter and look up to his coach several times.

The Greek then looked stunned when umpire Veljovic announced the coaching violation.

“I told you before, I’m going to consider it coaching,” she said.

“I did tell you that after the first set, remember?”

Tsitsipas’ father and coach, Apostolos, is known for being vocal which, according to some, has caused umpires to look out for signs of mid-match communication.

Elsewhere at the year’s first Grand Slam, Dan Evans became the final Brit to be eliminated in the single’s draw when Felix Auger-Aliassime romped to a straight-sets win on Saturday.

Evans joins Andy Murray and Emma Raducanu, who were both knocked out in the second round to opponents well below them in the world rankings.

Amongst the favourites, Rafael Nadal has already booked his spot in the fourth round after seeing off rangey Russian Karen Khachanov.

Daniil Medvedev and Alexander Zverev are also both through, with the latter winning every set so far this tournament.

When it comes to the former, the only set he has tasted defeat in was against Australian Nick Kyrgios, who is central to Saturday’s drama even after being knocked out of the single’s draw.

Following a raucous win over No 1 double’s seeds Nikola Metkic and Mate Pavic, two members of the Croatian pair’s coaching staff are alleged to have offered Kyrgios a fight in the locker rooms.