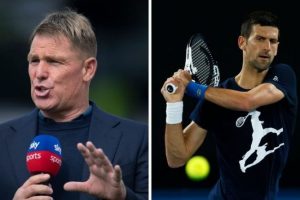 Shane Warne, one of Australia’s biggest sporting icons, agrees with the country’s intention to deport Novak Djokovic. The Serbian tennis star’s visa has been revoked for a second time, just three days before the 2022 Australian Open is set to commence in Melbourne.

On Friday morning, Immigration Minister Alex Hawke announced the cancellation of Djokovic’s visa was ‘in the public interest’.

It read: “Today I exercised my power under section 133C(3) of the Migration Act to cancel the visa held by Mr Novak Djokovic on health and good order grounds, on the basis that it was in the public interest to do so.

“The decision followed orders by the Federal Circuit and Family Court on 10 January 2022, quashing a prior cancellation decision on procedural fairness grounds.

“In making this decision, I carefully considered information provided to me by the Department of Home Affairs, the Australian Border Force and Mr Djokovic.

JUST IN: ‘You can’t ask me’ – Novak Djokovic judge loses patience with defen…

“The Morrison Government is firmly committed to protecting Australia’s borders, particularly in relation to the COVID-19 pandemic.

“I thank the officers of the Department of Home Affairs and the Australian Border Force who work every day to serve Australia’s interests in increasingly challenging operational environments.”

On Thursday night, Warne took to Twitter to publicise his agreement with Australia deporting Djokovic, labelling the fiasco as a ‘shambles’.

He wrote: “Novak is a great tennis player and one of the all-time greats. No doubt.

“But he’s lied on entry forms, been out in public when he knew he had Covid and is now facing legal cases. He’s entitled not to be jabbed, but Oz [Australia] is entitled to throw him out! Agree? #shambles”

Djokovic was initially held in an immigration detention centre after arriving in Melbourne from Dubai on January 5.

Tennis Australia and the Victoria State government had granted the 34-year-old Covid vaccination exemption, but his visa was refused at Melbourne Airport.

But he recently admitted to attending an interview and photoshoot after testing positive for Covid last month and putting a false declaration on his travel form, putting it down to a ‘human error’ by his agent.

Djokovic was included in Thursday’s Australian Open First Round draw despite the uncertainty surrounding his participation.

The world number one was due to face unseeded fellow Serb Miomir Kecmanovic, but his involvement is now severely in doubt.

Djokovic will now likely return to detention until a final decision is made, but his team can appeal the decision again in Federal Circuit and Family Court.