New York: Serena Williams will face a depleted field at this year's US Open but her recent form has made clear that her latest quest for a record-tying 24th grand slam singles title will hardly be a cakewalk.

Since tennis returned from a COVID-19 hiatus that lasted nearly five months, Williams has gone 3-2 in matches that all lasted three sets and have taken a toll on her weary legs. 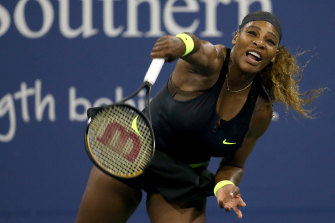 Serena Williams knows she is unlikely to get a better chance to equal Margaret Court’s haul of 24 majors than next week’s US Open.Credit:Getty

"I put myself in a bad situation. It's like dating a guy that you know sucks. That's literally what I keep doing out here. It's like I have got to get rid of this guy. It just makes no sense. It's frustrating."

With so many of the world's top players opting not to travel to New York amid the COVID-19 outbreak for the August 31-September 13 US Open, the path to a grand slam title might never again appear so undaunting for Williams.

The 38-year-old will be seeded third at the US Open and was drawn into the same quarter as former champion Sloane Stephens, 2017 finalist Madison Keys, two-time grand slam winner Garbine Muguruza and Sakkari.

"If she doesn't win this one, I would think people, and more specifically she herself, would most probably doubt that she can win another one," seven-time grand slam champion and Eurosport analyst Mats Wilander said.

"If she doesn't win this one, it's going to be harder to win the next one and the one after that."