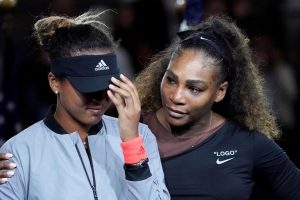 Serena Williams wants to give Naomi Osaka a "hug" after she withdrew from the French Open.

Osaka said she wouldn't speak to the media throughout the competition, which was met with mixed responses.

After she beat Patricia Maria Tig in the first round on Sunday she was fined $15,000 by the tournament organisers for not talking to the press. They then also threatened to expel her from the slam and future competitions.

Just a day later Osaka announced her withdrawal from the Open and opened up about her battle with depression.

She said: "I never wanted to be a distraction and I accept my timing was not ideal and my message could have been clearer. More importantly, I would never trivialise mental health or use the term lightly.

"The truth is I have suffered long bouts of depression since the US Open in 2018 and I have had a really hard time coping with that.

"Anyone that knows me knows I am introverted and anyone that has seen me at tournaments will notice that I'm often wearing headphones as that helps dull my social anxiety."

Osaka has since received an outpouring of support from fans and players, among them 23-time slam winner Williams.

She had said she wants to comfort the 23-year-old star as she knows what it's like to be in her shoes.

Williams said: "The only thing I feel is that I feel for Naomi. I feel like I wish I could give her a hug because I know what it's like. I've been in those positions.

"We have different personalities, and people are different. Not everyone is the same. I'm thick. Other people are thin. You just have to let her handle it the way she wants to, in the best way she thinks she can."

And she added about mental health: "I feel like there is a lot of articles that they put out. I think you really have to step forward and make an effort, just as in anything. You have to be able to make an effort and say, I need help with A, B, C, and D, and talk to someone.

"I've been in that position, too. I've definitely had opportunities to talk to people, kind of get things off my chest that I can't necessarily talk to anyone in my family or anyone that I know.

"For me it is important to have awareness and make that step."

After withdrawing Osaka said she will take some time away from the game.

If you're struggling with mental health call Samaritans on 116 123.