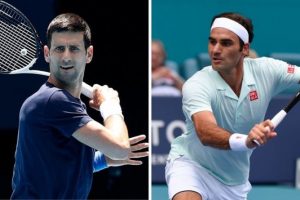 Djokovic back to training in Australia after court victory

Novak Djokovic has been included in the Australian Open draw as he awaits a decision from Australia’s Immigration Minister on whether his visa will be cancelled for a second time. If the world No 1 is able to compete, he will face compatriot MioMir Kecmanovic in the opening round. A video from 2019 has since resurfaced, showing the advice Djokovic’s long-time rival Roger Federer gave to the young Serb.

The Australian Open draw was made on Thursday, with defending champion Novak Djokovic included despite the chance he could be deported ahead of the tournament.

The world No 1 had his visa cancelled when arriving in Melbourne last week but won an appeal to have the decision overturned on the grounds of “procedural fairness” as the federal government conceded they did not give him enough time to contact Tennis Australia or get more proof of his medical exemption.

But Immigration Minister Alex Hawke still has the personal power to revoke the nine-time Aussie Open winner’s visa for a second time and have him deported.

His decision was expected to come ahead of the draw ceremony but instead the draw went ahead, delayed by over an hour, and included Djokovic.

JUST IN: Emma Raducanu learns Australian Open fate as she prepares for Round 1

In his quest for a record 10th Australian Open title and 21st Grand Slam title, the Serb is set to face compatriot Miomir Kecmanovic in the first round.

The two have faced off once before, in the quarter-final of Djokovic’s Serbia Open last year, won by the world No 1 6-1 6-3.

But Kecmanovic will be able to carry the advice of Roger Federer into his Australian Open clash against Djokovic, after the Swiss tennis star offered the young Serb some advice.

A video from the 2019 Miami Open has surfaced, showing the 20-time Grand Slam champion giving the young Serb some advice while he was ranked down at world No 95.

Now 22, Kecmanovic served as a ‘Next Gen reporter’ for the ATP Tour in a series of videos filmed during the 2019 Miami Open, and had the chance to speak to the former world No 1.

Having just cracked the top 100 for the first time after making his maiden Masters 1000 quarter-final in Indian Wells the week before, the then-19-year-old took the opportunity to get some advice from Federer.

“You’ve been on the tour longer than I’ve been alive almost, so do you have any tips that I could use out here?” he asked.

“Enjoy yourself, and you have enough time,” the current world No 16 told him.

“I think when you’re young you always think like ‘it has to happen tomorrow’.

“Just have a blast out there because I wish I was still your age and could do it all over again, so I’m a little bit sad I’m at the back end of my career. But I’m sure you’ll have a great career.”

Federer’s advice will still come in handy even if Djokovic has his visa revoked, leaving Kecmanovic with a different opponent.

In Djokovic is deported before the first order of play is released, fifth seed Andrey Rublev would be moved into the 34-year-old’s spot in the draw to face Kecmanovic, and would still be a tough opponent for the young Serb as an eight-time title winner who won Olympic gold in mixed doubles last year.