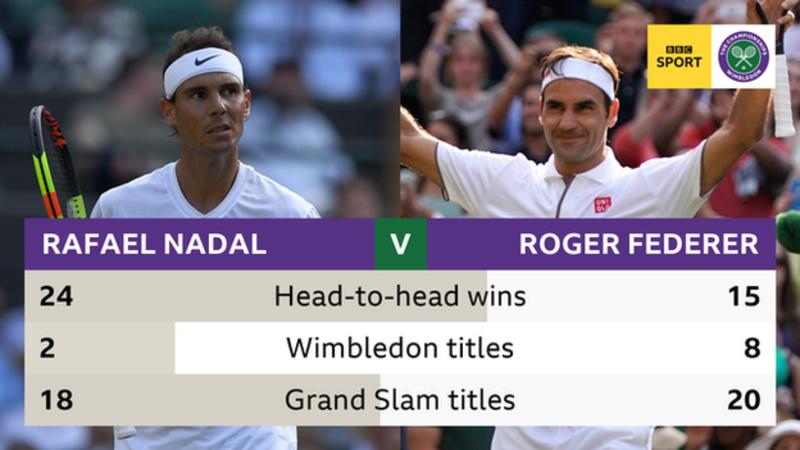 Roger Federer and Rafael Nadal renew their exalted rivalry on Friday when they meet at Wimbledon for the first time since the epic 2008 final.

Federer is aiming for his 21st Grand Slam title, while Nadal (18) and Djokovic (15) look to close the gap.

Friday’s highly-anticipated semi-final will be the:

“Often we see matches being overhyped but you can’t overhype this one – and rightly so,” three-time Wimbledon champion Boris Becker told BBC Sport.

“It is the biggest match of the year because you’re talking about two greats of the game.”

‘Unique’ and ‘exciting’ – Federer and Nadal on their rivalry

Federer: “Rafa has improved so much over the years on this surface. He’s also playing very differently.

“I remember back in the day how he used to serve, and now how much bigger he’s serving, how much faster he finishes points.

“We have a lot of information on Rafa, as does he on us. So you can dive into the tactics like mad, or you say ‘it’s grass-court tennis so I’m going to come out and play my tennis’.

“I’m excited to play him again.” 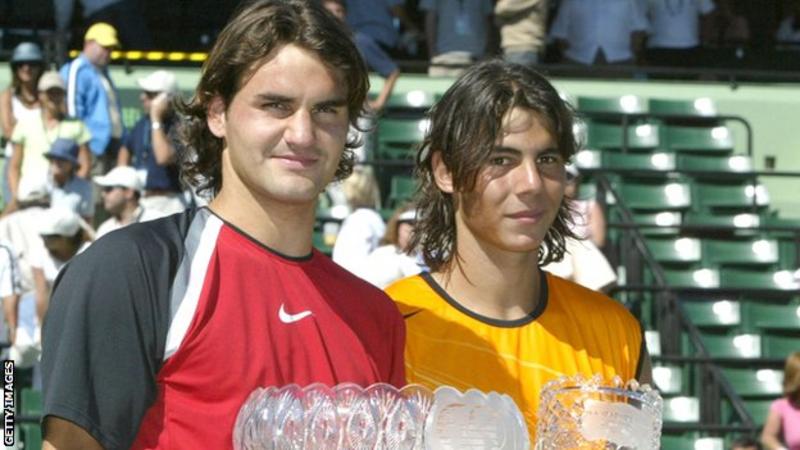 Nadal: “Playing against Roger is always a unique situation. I’m excited to be back on Centre Court against him after 11 years. It means a lot for me and probably for him, too.

“The opportunities to play against each other are becoming less, but we still here.

“I’m not expecting to learn new things about him. I just expect to play against probably the best player in history on this surface.

“I am playing with a very high intensity, playing aggressive, serving well and returning very well.

“I know that I have to play my best.”

‘The one match that every tennis player alive will watch’

Played over almost seven hours because of rain delays and ending in virtual darkness in front of a mesmerised Centre Court, Federer and Nadal’s last meeting at Wimbledon is widely regarded as the pinnacle of the sport.

Federer had spent 231 consecutive weeks as world number one and won his past 65 grass-court matches, yet Nadal toppled him to win his first Wimbledon title.

“I thought it was the best Wimbledon final of all time,” Becker said.

“So we’re very lucky to have this opportunity again on Friday.

“It’s the one match that every tennis player alive will tune in for.”

Federer and Nadal have both looked on top of their grass-court games in serene paths through to the semi-finals.

Federer, who has spent an average of one hour and 52 minutes on court, has only dropped sets against quarter-final opponent Kei Nishikori and, more surprisingly, South African debutant Lloyd Harris in the opening round.

“I think it was a wise decision for him to play the clay [court season] because physically he is in good shape and it has put him in a position to win the Championship,” Becker, who also coached Djokovic to Wimbledon glory in 2014 and 2015, said.

“What has impressed me most about Roger’s game is his mobility, he is still able to get to every ball on the court.

“Technically he has always been the finest, but his physical level is still incredible and it is unbelievable at his age. I don’t know how he does it.”

Nadal’s passage has been even smoother, having lost just one set in a second-round battle against controversial Australian Nick Kyrgios, on his way to a second successive SW19 semi-final.

As Federer points out, Nadal’s remodelled serve has paid dividends for the Majorcan, who has won 83% of first serve points at the All England Club.

“I think it is the best grass-court tournament Rafa has played, even though he has won two titles here,” Becker added.

“The way he plays has improved a lot, particularly the serve. He’s gone through his matches easily against difficult players like Jo-Wilfried Tsonga and Sam Querrey, and that’s because of his level.

“If Rafa wins the French Open it is a good year, if he wins another Slam as well it is a great year.”

Race to be the Goat continues

The battle to be the man with more Grand Slam titles than any other provides an added element of intrigue to the match between Federer and Nadal.

A third Wimbledon triumph for the Spaniard, who won the 2008 and 2010 titles, would move him just one behind the Swiss, having never been so close to his tally.

Federer, who is aiming for a record-extending ninth men’s singles title at Wimbledon, was nine majors clear of Nadal at the end of 2007 – when he was 26 and had already won 12 of his 20 majors.

Nadal closed that gap to just two with his 12th French Open title last month, while 32-year-old Djokovic is hot on their heels despite only winning his first major in 2008 and only adding a second three years later.

The rivalry in numbers

11 – Successive Grand Slam titles won between them, stretching from the 2005 French Open to the 2007 US Open

100 – Matches won by Federer at Wimbledon, the first man to reach a century at a single Grand Slam