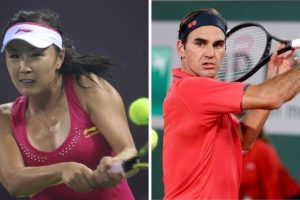 Roger Federer has raised his concerns for the whereabouts of missing Chinese tennis star Peng Shuai. The two-time doubles Grand Slam champion has not been heard from since accusing China’s former vice premier of sexual abuse on November 2.

Peng Shuai detailed accusations of sexual assault against Zhang Gaoli in a lengthy Weibo post on November 2, also alleging an on-and-off consensual affair with the now-retired politician, dating back to 2011.

The former doubles No 1 has not been accounted for since sharing the post about the former vice premier, who more than 40 years her senior, which was deleted within half an hour.

Zhang – who served on China’s top ruling council, the Politburo Standing Committee, between 2012 and 2017 – has not responded to the claims, while a spokesperson for Beijing’s foreign ministry denied all knowledge of the allegations when asked about the subject, saying: “I have not heard of it and it is not a diplomatic question.”

Multiple tennis players have spoken out on the issue, calling for proof of her safety and whereabouts, as well as an investigation into her claims.

Federer has now joined the likes of Serena Williams, Novak Djokovic and Rafael Nadal in commenting on the disappearance of Peng.

“I hope she is safe, the tennis world is united for her,” he said, addressing the missing Chinese tennis star.

The 40-year-old also confirmed he had been following the news and developments closely, and had discussed the matter with ATP Chairman Andrea Gaudenzi.

ATP world No 8 Casper Ruud was another player who voiced his concerns for the 35-year-old during his post-match press conference on Saturday, following his defeat to Daniil Medvedev.

Speaking on what he called currently the “most important” issue in tennis, the 22-year-old said: “I know that all the players here are concerned and worried. We all hope that we will hear back from her soon, that everything is fine for her.”

Meanwhile, the WTA CEO and Chairman has continued to demand an investigation into Peng’s accusations against the former vice premier of China, and is threatening to take all WTA Tour events out of the country unless he receives a satisfactory reponse over an investigation and the tennis player’s whereabouts.

“We are at a crossroads with our relationship with China and operating our business over there,” women’s tennis boss Steve Simon told CNN on Friday (November 19).

“We’re definitely willing to pull our business and deal with all the complications that come with it because this is certainly, this is bigger than the business.

“Women need to be respected and not censored.”

ATP world No 1 Novak Djokovic also spoke on the matter for a second time while competing in the ATP Finals, saying he “100%” supports Simon’s plans to withdraw tennis from China.

“I’m really glad that there was a kind of an initiated reaction from both ATP and WTA Chairmen and it’s important because this is horrifying. A person is missing,” he said, speaking following his round-robin win over Cameron Norrie later on Friday.

“China is a huge country, it’s a very important part of the world, especially for the WTA, they have many tournaments there.

“I mean, this is necessary for us to take whatever actions, and I heard just now from Reem [Abulleil, journalist] that [the] WTA I willing to pull out from China with all the tournaments unless this is resolved, I support it 100%.”