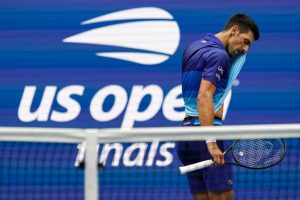 NEW YORK — A game from the end of his bid for what would have been the first calendar-year Grand Slam in men’s tennis since 1969, Novak Djokovic covered his face with a towel, hiding his tears during a changeover.

Outplayed by someone using a similar style to his own, Djokovic came up just short of those two historic milestones, losing 6-4, 6-4, 6-4 to first-time major champion Medvedev at Arthur Ashe Stadium.

What was in Djokovic’s thoughts as he sat there on the sideline, knowing full well that his quest was moments from its conclusion?

“Relief. I was glad it was over, because the buildup for this tournament, and everything that mentally, emotionally, I had to deal with throughout the tournament in the last couple of weeks, was just a lot. It was a lot to handle,” Djokovic said at his news conference. “I was just glad that, finally, the run is over. At the same time, I felt sadness, disappointment — and also gratitude for the crowd and for that special moment that they’ve created for me on the court.”

Until Sunday, the No. 1-ranked Djokovic had been sublime at the sport’s four most important tournaments, enduring the burdens of expectations and pressure over the past seven months and, in New York, the past fortnight.

He won the Australian Open in February, beating Medvedev in the final in straight sets, the French Open in June and Wimbledon in July, pulling even with Rafael Nadal and Roger Federer at 20 Grand Slam titles, the most for a man in the history of a sport that dates to the 1800s.

The last man to complete a true Grand Slam by going 4 for 4 at the majors in a single season remains Rod Laver, who did it twice — in 1962 and 1969 — and was in the stands Sunday. The last woman to accomplish the feat was Steffi Graf in 1988.

Instead, Djokovic joins Jack Crawford in 1933 and Lew Hoad in 1956 as men who won a year’s first trio of Grand Slam tournaments and made it all the way to the U.S. Open final before losing.

“I do feel sorry for Novak, because I cannot imagine what he feels,” said Medvedev, a 25-year-old from Russia who had been 0-2 in major finals. “Knowing that I managed to stop him, it definitely makes it sweeter, and brings me confidence for what is to come.”

Djokovic, a 34-year-old from Serbia, simply was far from his best on this particular day.

“Just energy-wise, I felt slow,” said Djokovic, who could not create the kind of comeback he had in each of his previous four matches — and six others in Grand Slam action this year — when he dropped the opening set.

“I know I could have, and should have, done better,” he said.

Djokovic made plenty of mistakes, 38 unforced errors in all. He wasn’t able to convert a break chance until it was too little, too late, going just 1 for 6. He showed frustration, too, destroying his racket by pounding it three times against the court after one point, drawing boos from the crowd of 25,703 and a code violation from chair umpire Damien Dumusois.

A lot of Djokovic’s issues also had to do with the No. 2-ranked Medvedev, who used his 6-foot-6 (1.98-meter) frame to chase down everything and respond with seemingly effortless groundstrokes — much the way Djokovic wears down foes — and delivered pinpoint serving.

“He was amazing. Just congratulate him, full credit from his mentality, his approach, his game, everything,” Djokovic said. “He absolutely was the better player and deserved to win, no doubt about it.”

Medvedev won 20 of his first 23 service points, establishing a pattern. He finished with 16 aces and 38 winners in all, 11 more than Djokovic. And Medvedev employed a strategy his coach, Gilles Cervara, described as hitting more balls down the middle of the court, rather than trying to find angles that would Djokovic to pick up balls on the run.

“He’s so good that every match is different. He changes his tactics, he changes his approach,” Medvedev said about Djokovic.

Nerves, distracting noise from spectators and cramps that started in his legs got to Medvedev at the very end. He served for the match at 5-2 and was a point from winning before double-faulting twice in a row. At 5-4, he had a second match point and double-faulted again. On the next chance, though, a 129 mph service winner finally finished the job, and Medvedev toppled over to the court on his side with his tongue hanging out, which he explained afterward was inspired by a goal celebration from a soccer video game.

During the trophy presentation, Medvedev addressed Djokovic, offering praise for “what you accomplished this year and throughout your career” and adding, “I never said this to anybody, but I’ll say it right now: For me, you are the greatest tennis player in history.”

In recent years, there has been constant discussion and debate about which member of the so-called Big Three — Federer, who turned 40 last month, Nadal, 35, or Djokovic — deserves to be considered the best of the bunch and the “GOAT” (“Greatest of All Time”).

Even with Sunday’s setback, Djokovic has accumulated statistics that help people make the case for him. He is the only one of that dominant trio to have won four majors in a row across two seasons, in 2015-16. He is the only one with at least two titles at each major tournament. He is the only player who has won each of the next-tier Masters 1000 events at least twice, too. He has spent more weeks than anyone at No. 1 since the ATP computerized rankings began in 1973, surpassing Federer for that accolade in March. And he holds the edge in head-to-head matchups against both of his long-time rivals.

After a five-set win over Tokyo Olympics gold medalist Alexander Zverev on Friday night, Djokovic looked ahead to what awaited in the final and declared, “I’m going to put my heart and my soul and my body and my head into that one. I’m going to treat the next match like it is the last match of my career.”

But Medvedev, who lost only one set in the entire tournament, never allowed Djokovic to get into this match.

From the start, Djokovic was not quite himself. After flubbing three break points early in the second set, the last with a sliced backhand in the net, he pounded his racket against his thigh — one, two, three, four times, perhaps as disappointed in his footwork as his form.

Thousands in the audience tried to boost him by chanting his nickname, “No-le! No-le! No-le!” After some of Medvedev’s faults, some in the stands would applaud, considered poor form in tennis and repeatedly admonished with a “please” from Dumusois.

By the end, the deficit grew too large for Djokovic, the climb too steep.

“I was below par with everything, to be honest,” he said. “So just one of these days where, unfortunately, wasn’t meant to be.”