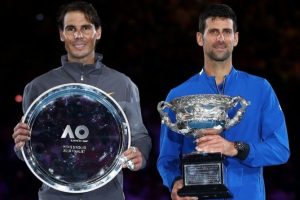 Tennis Grand Slams: Who is the greatest of all time?

Rafael Nadal has given his verdict on Novak Djokovic’s chances at completing the calendar year Grand Slam at the US Open. The Spaniard has ‘no doubt’ that his long-time rival can take home the title in Flushing Meadows later this summer. It would make the world number one the first male player in Open Era history to win all four Grand Slams in one year.

Djokovic narrowly missed out on achieving the Golden Slam, all four Majors and Olympic gold in the same season, but still has a chance to secure the Grand Slam at the US Open later this month.

It would make him the first man to win all four Slams in one year since Rod Laver in 1969, and the first male player in the Open Era.

His long-time rival Nadal has had his say on the Serb’s chances, and isn’t shying away from declaring that he could win it all.

Putting it simply, the world number three said of Djokovic: “He’s already won three, so when you win three, you can win four, without a doubt.”

JUST IN: Novak Djokovic’s father warned him not to compete at Olympics

“He’s going to be playing on hard courts, probably his best surface, so why not? Of course it’s something difficult.

“[There are] going to be other guys that want to achieve the last Slam of the season. But of course he’s one of the clear favourites.”

Djokovic, Nadal and Roger Federer are currently all tied up in the Grand Slam race with 20 trophies each, so a win in New York would separate the world number one from his big three rivals.

Although the Spaniard’s chances of rising above the rest with a 21st Major title were thwarted by Djokovic himself at Roland Garros earlier this year, he’s still been more than impressed with the Serb’s season.

“What he achieved this year is something, well, amazing,” he said.

Touching on the calendar Grand Slam attempt once more, the 13-time French Open winner said: “I definitely believe that he can do it, without a doubt.”

The left-hander was forced to watch from afar as Djokovic won the title at the All England Club last month, as he pulled out from Wimbledon and the Olympics following his shock loss at the hands of the world number one himself.

He has since revealed that a foot injury left him completely unable to play for 20 days, as he prepares to play his first tournament since the Roland Garros loss at the Washington ATP 500.

It’s the 35-year-old’s first time playing the event, something he rarely gets to say having dominated on tour since he was a teenager.

Ahead of the tournament, Nadal said: “I love to be here in Washington because [it] is not only a new event for me, [it] is a new city. I am able to visit one of the most important cities in the world. And honestly, it’s a very beautiful city.”

The Spaniard has a bye to the second round where he awaits the winner of a first round class between Jack Sock and Yoshihito Nishioka.

He added: “Playing in Washington allows me to be on the tour one week before than what I do usually for this part of the season.

“But missing Wimbledon, I think that’s the right thing to do. The decision I think is the right one.”