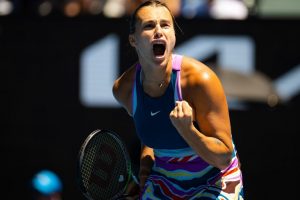 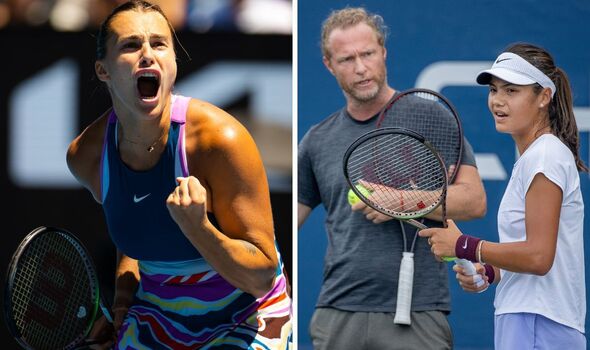 And it was also the end for a teenage phenomenon and another top player but there were tears of joy from an unseeded quarter-finalist.

There was another scheduling row after the only former women’s champion left in the draw finished her match in the early hours.

There will be no new balls at Melbourne Park for five years.

And a former player – and now a TV analyst in Australia – has revealed her torment at being fat shamed by “evil and disgusting” people on social media.

Here is what has happened so far as the second week starts in the first Grand Slam of the year.

Bencic beaten by the red-hot Sabalenka.

Coach Dimitry Tursanov split with British No.1 Raducanu in October and claimed there were “red flags” which stopped their working relationship continuing.

The Russian teamed up with Olympic champion to reach the fourth round here but the Swiss was dismissed 7-5 6-2 by No.5 seed Sabalenka. The Belarusian won 11 of the last 14 games and is 8-0 in 2023 without dropping a set.

But Bencic said: “I’m not like super devastated after this loss. I feel like I had a great start of the year. “I feel like I just want to go back and work harder and come back.”

The fairytale run of teenager Linda Fruhvirtova was ended 6-2 1-6 6-3 by Donna Vekic.

The Czech, 17 had been bidding to become the youngest player to reach the quarter finals here since Martina Hingis and Serena Williams in 1998.

“Definitely was a very positive tournament for me,” she said. “I was close today, so it sucks, of course, but I think I’m going to get some more chances here in the following years.

No.4 seed Caroline Garcia, who won the WTA Finals last season, went out 7-6 6-4 to the unseeded Magda Linette.

The Pole, who reached her first ever Grand Slam quarter-final at her 30th attempt, cried in the Rod Laver Arena after setting up a clash with former world No.1 Karolina Pliskova.

World No.45 Linette said: “I don’t really believe it. I don’t know, I still can’t believe it really. I don’t know what happened. World No.3 Jessica Pegula, who faces Victoria Azarenka in the night session tomorrow, is now the highest-ranked female left in the competition after the early exits of Iga Swiatek and Ons Jabeur.

After Andy Murray’s second round match finished at 4.05am, Azarenka’s did not complete her third round win over Zhu Lin until the early hours of Monday morning

Watching Chris Evert tweeted: “Watching Azarenka and Zhu… what other sports, if any, compete at 2:30 am???”

Asked what time she would get to bed, Azarenka replied: “I don’t even know what time it is. Probably I’ll be up till 6am, then mask on and sleep during the day.”

Andy Murray, Novak Djokovic and Rafa Nadal have all complained about the flat and fluffy Dunlop balls used at the Australian Open – and claimed they make rallies long.

But the first Grand Slam of the season has renewed the contract with Dunlop Sports for another five years.

Tournament director Craig Tiley said: “The ball this year is exactly the same specification as last year. You can’t change the ball mid tournament but following the event we’ll debrief again with our partners and see.”

Kyrgios under the knife

The Aussie No.1 pulled out of his home Grand Slam with a knee injury and he has now had surgery in Canberra.

The world No.1 filmed himself for his Instagram story dressed in a gown before his procedure to clean up his lateral meniscus and remove a cyst.

And the Wimbledon finalist posted again later to announce the surgery was a success. “I’ll be doing everything I can to get back to my best,” he wrote. “To the real ones checking in and sending the vibes … I love you.”

Jelena Dokic has taken social media trolls to task for the second time this Australian Open to open up about being fat shamed by “evil and disgusting” people.

“The ‘body shaming’ and ‘fat shaming’ over the last 24 hours has been insane,” she wrote on Instagram.

“Coming from everywhere in the world and a special shout to so much of it coming from Serbia as the last picture confirms.

“And yes a lot of them are women too. So much for ‘women supporting women’.