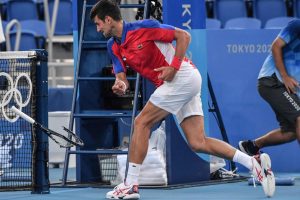 The world no.1 smashed his racquet after a number of tantrums in his individuals semi-final defeat to Pablo Carreno Busta.

The raging Wimbledon champion launched one racquet into the empty stands and smashed another against the net post in a fit of frustration, directly in front of the umpire.

Djokovic has been widely criticised for his behaviour in the match from tennis fans.

Djokovic cited a shoulder injury for the reason for his withdrawal, as he leaves Tokyo without a medal for yet another Olympic Games.

The 34-year-old Olympic medal collection remains with a solitary bronze from Beijing in 2008.

Former GMB presenter Morgan weighed in on Djokovic's antics, claiming the Serb 'let his country down'.

"He let his teammates down, his fans down, & his country down. Shameful antics from a supposed champion."

Djokovic will be 37 during the Paris games in three years time and has vowed to fight for a medal once again in the French capital.

But he has cast doubt over his involvement in the US Open, due to start next month.

"I do have a regret for not winning a medal for my country. Opportunities missed both in doubles and singles. I didn't deliver yesterday and today, the level of tennis dropped, also due to exhaustion, mentally and physically.

"But I don't regret coming to the Olympics at all.

He continued: "I believe there is no coincidence in life, everything happens for a reason, and I had some heartbreaking losses at Olympic Games and some big tournaments in my career, and I know that those losses have usually made me stronger, in every aspect.

"I know that I will bounce back. I will try to keep going for Paris Olympic Games, I will fight for my country to win medals and I'm sorry that I disappointed a lot of sports fans in my country, but that's sport.

"I gave it all, whatever I had left in the tank, which was not so much. I felt it out on the court. The consequences physically hopefully will not create a problem for me for US Open. That's something that I'm not sure about right now.

"But I'm not regretting giving it all because, when you play for your country, that's necessary."