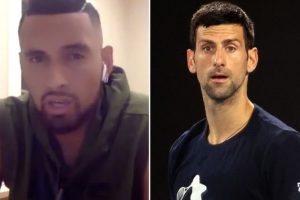 Nick Kyrgios has opened up on the message he received from Novak Djokovic with the Australian having backed the world No 1 throughout his week-long Australian Open ordeal. Djokovic on Friday had his visa to enter the country cancelled for a second time by Immigration Minister Alex Hawke.

Hawke revealed that he revoked Djokovic’s visa for a second time on “health and public order grounds” after the Serbian had won an appeal, with Federal Circuit Court Judge Anthony Kelly ordering he be freed from detention.

His visa was removed the first time after questions were raised over his vaccination exemption, with Djokovic stating that he had tested positive for COVID-19 in December. Judge Kelly said: “The point I’m somewhat agitated about is what more could this man have done?”

Djokovic has however now been detained once more at the immigration detention hotel in Melbourne, where he had already spent four nights, and will once again have a case heard by the Federal Court on Sunday as he seeks for the decision to deport him to be overturned a second time.

Even if he is allowed to eventually play the Australian Open, the 20-time Grand Slam champion is unable to train or practice before Monday when the tournament begins and therefore his chances of becoming the first male player ever to win a 21st major have been significantly hindered.

And despite having had several previous clashes with Djokovic, Kyrgios has stuck up for Djokovic and believes more of his fellow ATP Tour players should be looking to defend the 34-year-old.

The Aussie, speaking on his No Boundaries podcast, launched into an expletive-filled rant as he admitted his frustrations that the likes of Rafael Nadal and Stefanos Tsitsipas have spoken out against Djokovic.

Kyrgios also revealed that he had been personally messaged by nine-time Melbourne victor Djokovic, who thanked him for his support in recent weeks.

He explained: “Novak has reached out to me personally over Instagram to say thank you for standing up for him, I was not the one he was expecting to go out in the media and have his back.

“I think he’s obviously feeling quite alienated in all of this and as a human it’s a dangerous place to be when you feel like the world is against you and you can’t do anything right and all he wants to do is come here and play tennis.

“I think on a human level he needs some support from other tennis players.

DON’T MISS: Djokovic just one of three players inside ATP top 100 not vaccinated

“He goes: ‘Trying to actually understand the situation and have a bit of objectivity rather than fire all bullets right away, I appreciate that thank you.’

“So he’s just asking for a bit of understanding, that’s literally what he’s saying.”

Explaining his frustrations at defending Australian Open champion Djokovic’s situation, Kyrgios added: “This Hawke guy is like, ‘He’s a threat to our borders’ and I’m just like, ‘Well no he’s not’.

“We’re treating him like he’s a weapon of mass destruction at the moment, but he’s literally here to play tennis.’

“I honestly want him to f***ing win the event, I think it would be f***ing awesome. I want to walk around Melbourne with Novak’s mask on my face.

“I just think if Australia as a whole dealt with Covid better, if the people of Melbourne didn’t get so f***ed over by everything in these f***ing rules, I don’t think this would be such a big issue.”

“But I feel like we’re only treating him like Novak Djokovic, not like a human. Imagine how he’s feeling, he probably just wants a little bit of support from other players. He’s getting it from me! Like, what the f***?

“I just feel like these athletes should give him some support. I’m sure if Nadal was in a similar situation he would be looking towards his other fellow athletes to stand up for him and help him.

“Tsitsipas we understand you have your views on f***ing vaccination, [Andy] Murray we can always count on you to say the right think, and like Nadal whatever… but bro, where’s your support for the guy?”