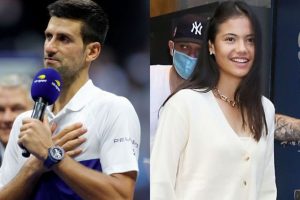 Novak Djokovic is the latest tennis legend to congratulate British teenager Emma Raducanu on her US Open success. Raducanu stunned the tennis world over the last three weeks, coming through three qualifying matches and seven main-draw matches without losing a set to win the title.

Raducanu was competing in only her second major tournament after making the last 16 of Wimbledon as a wildcard over the summer, but conquered the Olympic champion Belinda Bencic, as well as the likes of Maria Sakkari and fellow breakthrough teenager Leylah Fernandez, on the way to the title.

The Bromley youngster’s route to glory was so serene she was not stretched as far as a tie-break in any of her 10 matches in New York. The 2,000 WTA Tour ranking points she earned from the tournament win moved her up to 23rd in the revised world rankings on Monday – up from 150.

Twenty-four hours on from the women’s singles final at Arthur Ashe Stadium, world No.1 men’s player Djokovic was vying to become the first male player to win the calendar Grand Slam since Rod Laver against Daniil Medvedev.

Ultimately, the 34-year-old fell short after a colossal year on tour, going down 4-6 4-6 4-6, but he took to Instagram on Monday to congratulate both Medvedev and Raducanu on their stateside successes.

Djokovic wrote: “Congratulations to both Champions. Amazing fairytale story on woman’s side with 2 teenagers competing in the finals. @emmaraducanu you are fantastic. Daniil,you absolutely deserve your first Grand Slam title!”

Meanwhile, Raducanu told American broadcaster ABC on Monday that her tough-to-please parents are partly responsible for the astonishing early success she is enjoying in her career.

“It was really nice to talk to them after I won,” she said. “They were just so happy and proud of me and my toughest critics, and very, very hard to please. But, yeah, I got them with this one. They couldn’t resist.

“I think that from a young age I’ve always sort of been brought up to have mental strength. My parents played a huge part in my upbringing and they were pretty tough on me when I was young, but it kind of shaped the way I am.

“And I think now it’s helping on the biggest stages in the world, and Arthur Ashe stadium, when you really need it, and it was basically at full capacity – so it was very, very cool.”