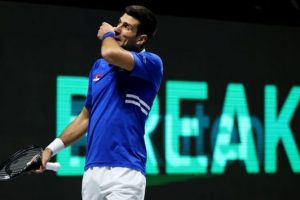 Novak Djokovic has been told to ‘take one for the team’ and get vaccinated against COVID-19 as legendary player Martina Navratilova weighs in on the debacle surrounding the player in Australia. Judge Anthony Kelly overturned the decision to cancel Djokovic’s visa on Monday, but the Serbian has allegedly been arrested by the Australian government, who still want him out of the country.

Djokovic arrived in Australia last week after being granted a medical exemption to play at the first Grand Slam of the year.

But Australian Border Force deemed his exemption to be invalid and told him that he would be deported.

Djokovic was then told he had until 8.30am the next morning to make comments about the visa cancellation.

But he was later pressured to respond much earlier, before a final decision was made at 7.40am.

Djokovic was eventually moved to a state-run immigration facility in nearby Carlton, before lodging an appeal.

At court on Monday, the judge decided that border officials did not follow correct procedures and released Djokovic from detention.

But the Australian government has apparently now arrested him as they endeavour once again to send him on his way. Immigration Minister Alex Hawke can still cancel Djokovic’s visa, though a decision is now not expected until later this week after the initial window passed.

During his conversations with the Australia Border Force, Djokovic revealed he had not been vaccinated.

And Navratilova believes the 20-time Grand Slam winner could have dodged the whole sorry affair if he had just been vaccinated in the first place.

Djokovic ‘not being fed breakfast’ as star’s mother slams conditions

“It’s unbelievable – what a saga,” Navratilova said. “It could have been avoided. I just wish Novak had taken that vaccination to begin with.

“I admire him so much but I can’t defend the choice to not get vaccinated.

“You have to take one for the team. It’s getting crazier by the minute.

“We’re in such close contact in the locker rooms. I couldn’t wait to get vaccinated. I admire Novak and I know what it takes to be that committed.

“I would be much more scared of getting sick from not being vaccinated than whatever side effects I might have from the vaccination. You really need to be more aware of everybody else.”

Djokovic now faces another anxious wait to discover whether he will be allowed to compete in Melbourne.

The 34-year-old has won more Australian Open titles than any player in the history of tennis after lifting the trophy a remarkable nine times.

He has won the last three tournaments and hasn’t lost a match there since being shocked by the unseeded Hyeon Chung in the fourth round four years ago.