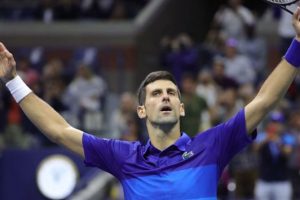 Novak Djokovic is just one win from history, but he’s not about to get ahead of himself. If the world number one defeats Daniil Medvedev in Sunday’s US Open final, he’ll become the first male player to complete a calendar Grand Slam since Rod Laver in 1969. Victory at Flushing Meadows will also see the Serbian claim a record 21st Slam title, moving him clear of Roger Federer and Rafael Nadal who both currently tie his career total with 20.

However, after coming through his semi final with Alexander Zverev in five sets, Djokovic retained perspective in his post-match press conference

The 34-year-old made his point by copying the famous Kobe Bryant quote after the Los Angeles Lakers took a 2-0 series lead in the 2009 NBA Finals.

“It’s his famous interview where he said, ‘Why should I be happy right now? Job is not done,'” Djokovic said.

“He’s been someone, as probably millions of athletes and people around the world have been looking up to him, admiring him. That’s kind of an attitude I have. Job is not done. Excitement is there. Motivation is there, without a doubt. Probably more than ever. But I have one more to go.”

The Lakers did go to to take the series 4-1 against Orlando Magic, and Djokovic will be gunning for a similar glorious outcome on Sunday.

JUST IN: Emma Raducanu ‘enchanted viewers’ with ‘more poise than her critics’

He will have his work cut out however against world number two Medvedev, who will no doubt be desperate to avoid a repeat of this year’s Australian Open final which the Serbian won in straight sets.

The Russian player also made the final at Flushing Meadows in 2019, only to lose to Rafael Nadal, but was impressive in beating 12th seed Felix Auger-Aliassime of Canada in his semi-final.

Afterwards, he appeared determined to finally take his chance to capture a Slam this Sunday.

“I lost two finals. I want to win the third one.”

Fittingly, the 81-year-old Laver was in the President’s Box at the Arthur Ashe Stadium to watch Djokovic recover from losing the first set against German player Zverev before prevailing 4-6 6-2 6-4 4-6 6-2, in a match that lasted three hours and 33 minutes.

And in his on-court interview afterwards, Djokovic said he’d be treating the final as if there was nothing more to come afterwards.

“There’s only one match left. All-in. Let’s do it,” he said, while spreading his arms out wide.

“I’m going to put my heart and my soul and my body and my head into that one. I’m going to treat the next match like it is the last match of my career.”

Meanwhile, the excitement is building massively ahead of the women’s final at Flushing Meadows.

Tennis fans have witnessed an incredible story at the US Open with the two teenagers defying the odds and taking the major by storm.

Raducanu sealed her spot in the final after beating Maria Sakkari while Fernandez overcame Aryna Sabalenka.