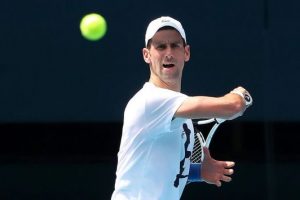 But the world number one still faces further legal challenges and possible deportation. Djokovic celebrated the decision by judge Anthony Kelly to overturn the Australian government’s withdrawal of his visa and set him free from a detention quarantine hotel in Melbourne.

He posted a picture with his coaching team and tweeted: “I’m pleased and grateful the judge overturned my visa cancellation.

“Despite all that has happened, I want to stay to compete (at) the Australian Open. I flew here to play at one of the most important events we have in front of amazing fans.”

Lawyers for the 34-year-old Serb star successfully argued the withdrawal of his visa was unreasonable.

The tennis ace has been at the centre of a political storm since he flew into Australia a week ago.

He was forced to stay at the quarantine hotel after being stopped by border staff at the city’s airport over his Covid jab status. Officials later cancelled his visa.

Djokovic, who has spoken against Covid vaccinations, insisted a medical exemption allowed him to enter Australia. He said he had Covid in December, making him exempt.

But the Australian government denied giving the player any assurances. It insists his recent infection does not make him eligible for an exemption from entry rules.

COMMENT: Who on earth does Djokovic think he is? Time to send him packing, says CHRISTOPHER SMITHERS

The legal wrangle was criticised by stars of the game, including Andy Murray.

The Scot also expressed concern for his Serbian friend whose release was welcomed by adoring fans outside the hotel and his family.

Djokovic’s mother Dijana said the ruling had conquered “lies” and was the “biggest victory” of her son’s career, while his father Srdjan asked the Queen, as head of the Commonwealth, to protect the nine-time Australian Open champion’s “human rights”.

Mrs Djokovic added: “He’s done nothing wrong. He hasn’t broken laws and was subjected to torture, to harassment. This was extremely difficult.”

Former UKIP leader Nigel Farage joined in the family’s celebrations in Belgrade, apparently at their invitation, saying it was a “big victory for freedom of choice”.

He accused the Australian immigration authorities of “bullying” and “nasty tactics”.

But the family refused to answer questions about their son’s apparent failure to self-isolate after Covid.

Australia’s immigration minister Alex Hawke could still cancel Djokovic’s visa and ban him from entering the country for up to three years.

He is due to start his bid to retain the Open title and win a landmark 21st major next Monday.

But Abul Rizvi, a former Australian immigration official, said he will get a rough ride from spectators.

“The public will be angry [he] did not get himself vaccinated. There will be a lot of difficulties for Djokovic from the crowds,” he said.