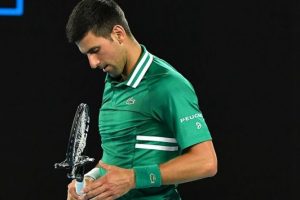 Novak Djokovic has spoken out for the first time since Australian Open organisers confirmed a ban for all unvaccinated players in 2022. The nine-time champion had previously cast doubt over his participation in the season-opening Grand Slam tournament as he refuses to disclose his vaccination status. After tournament director Craig Tiley confirmed all players needed to be jabbed in order to compete in January, Djokovic remained coy over his final decision.

There had been months of speculation that a vaccine mandate would be introduced for the 2022 Australian Open, as government officials stood strong on their stance not to allow unjabbed players into the country.

Craig Tiley, Tennis Australia boss and Australian Open tournament director, finally confirmed the news on Saturday (November 20), despite previous hopes that unvaccinated players could receive an exemption and undergo a two-week hotel quarantine to gain entry to the country.

“It’s been made very clear, when the Premier announced several weeks ago that in order to participate at the Australian Open, to come into Victoria, you’ll need to be fully vaccinated,” Tiley said, confirming mandatory vaccinations for all players.

“Immediately we communicated that to the playing group, it is the one direction that you take that is going to ensure everyone’s safety.”

He also confirmed that players knew the rules, and revealed that Djokovic’s whole team was fully aware and knew they all had to be vaccinated in order for the world No 1 to compete in Melbourne.

“We have been speaking to Novak Djokovic’s team and Novak and the team understand clearly that in order to come and play the Australian Open they’ll need to be fully vaccinated.

“I know that he wants to play it, he’s clearly indicated that and he knows the conditions that he’d have to undergo in order to be eligible to play.”

Speaking to Serbian newspaper Blic last month, the nine-time Australian Open champion admitted he wasn’t sure whether he’d travel to Melbourne to compete in the tournament next year, but later told reporters at the Rolex Paris Masters that he would no longer comment on the matter until a final decision was announced by organisers.

Following the 34-year-old’s loss to Alexander Zverev at the Nitto ATP Finals on Saturday evening, he was asked whether he would be playing the upcoming Australian Open for the first time since Tiley confirmed all players needed to be jabbed.

Despite promising a response after there had been confirmation of a vaccine mandate, Djokovic gave little away on his final decision to compete.

“We’ll see,” he said, speaking in his post-match press conference at the conclusion of his final tour match of the 2021 season.

The world No 1 added: “I haven’t been talking to them [Tennis Australia], to be honest. I was just waiting to hear what the news is going to be. Now that I know, we’ll just have to wait and see.”

It is not known whether Djokovic remained indecisive because he is still weighing up the decision to get vaccinated over the off-season in order to be able to play the Australian Open, or whether he has made a final decision but did not want to disclose it following a tough three-set loss in the semi-final at the year-end finals.

Other players at the ATP Finals, including defending champion Daniil Medvedev and debutant Casper Ruud, also voiced their thoughts on the tournament’s decision to make full vaccination mandatory.

“I actually am a little bit surprised that they confirmed it so late. It’s been months,” Medvedev said, speaking after he won his semi-final against Ruud and booked a place in the final for a second year running.

Meanwhile, Ruud was understanding of the decision as he said: “I don’t think it’s the tournament that decides it’s the government. You will have to ask the mayor or the governor or whatever they call it down there of Victoria. He’s the one that decides. The tournament is played in Melbourne. That’s how it is everywhere we go.

“We have to listen to the government, and they will decide. I’m sure Craig Tiley and the rest of the team are doing everything they can to be able to put on the event. That’s the rule for next year. Yeah, we will have to deal with it.”
Source: Read Full Article