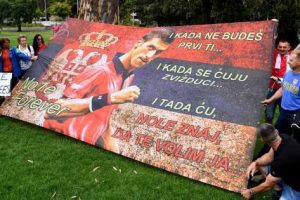 An Australian judge ruled in favour of Novak Djokovic in his bid to remain in the country ahead of the opening Grand Slam of the year.

The world No 1 had done everything required of him to prove his vaccination exemption status, the judge said, and it appeared he would be free to defend his title in Melbourne, where he has won a record nine times.

However, within hours it emerged it wouldn't quite be so simple, as a legal loophole does allow Australia's immigration minister, Alex Hawke, to personally overturn the decision to revoke Djokovic's visa cancellation, irrespective of the judge's ruling.

Hawke, now the one person who could stand in the way of Djokovic and his bid to win a record 10th singles title in Melbourne, will reportedly consider the matter in the coming days.

Should Djokovic's visa be cancelled again, the move will be seen by many as political point-scoring by the Australian prime minister Scott Morrison, ahead of the upcoming federal election.

An Australian judge ruled overwhelmingly in favour of Djokovic in a Melbourne court after he appealed last week's decision to revoke his visa upon his arrival in the state of Victoria.

Djokovic touched down in Melbourne last Wednesday after confirming he had received an exemption to compete in the opening Grand Slam of the year, despite being unvaccinated against Covid-19.

However, Border Force officials detained him at the airport for several hours before it was decided his visa would be revoked and that he would be deported, despite Djokovic having been told by both Tennis Australia and the Victoria goverment that they were satisfied with his medical exemption – which it has since emerged was a positive Covid test in mid-December.

That was because the federal (national) government was not satisfied, and it soon emerged that the federal government had written to Tennis Australia on multiple occasions last year informing them that a positive Covid test wouldn't be enough to render somebody exempt from being vaccinated.

Djokovic's legal team managed to postpone the world No 1's deportation until an appeal was heard today, where a judge ruled in Djokovic's favour.

However, a legal loophole means the federal government retains the power to cancel Djokovic's visa, irrespective of the judge's ruling, and that decision now lies with Australia's immigration minister Alex Hawke, who will deliberate over the matter from Tuesday (Australian time) and potentially beyond.

If Australia's immigration minister Alex Hawke does decide to overturn the judge's decision and re-cancel Djokovic's visa, he could face a ban from the country for three years.

However, that seems unlikely and the federal government has already said Djokovic could be permitted to return for the 2023 Australian Open, even if they prevent him from defending his title this time around.

Australia's immigration minister Alex Hawke, understood to now be the one man with the power to overrule the judge's decision and deport Djokovic, will not make a decision on the matter today.

It is currenty 9:40pm in Melbourne and it is understood Hawke will take his time to consider the matter.

It was previously reported that Hawke had a window of just a few hours to make the decision, but that is not the case in this particular instance, and he has the power to cancel the visa at any time.

Ivica Dacic, the president of the National Assembly of Serbia, said he fully expects Australia to deport Novak Djokovic as he branded the Australian authorities' treatment of the world No 1 as "generally shameful" and likened it to "political harassment".

Dacic said: "Every country has the discretionary right to deny entry to someone, but it has almost never been about famous people as it is now about Novak Djokovic. It is something that is rarely seen. In general, this procedure is shameful and there must be reactions from our side."

Dacic also conceded there would be little Serbia could do to aid Djokovic were Australia to follow through with their seeming intention to deport him.

Unrest in the streets in Melbourne

Unsavoury scenes have broken out in the streets of Melbourne, with some protesters, reported to be supporters of Novak Djokovic, allegedly resorting to violence against the police.

Opinion: Overturning judge’s decision would be political point-scoring, and nothing else

It has emerged Djokovic satisfied the vaccination exemption requirements of both Tennis Australia and the Victoria government, and however you may feel about his supposed anti-vax views, he had every reason to believe he would get into the country without a hitch last week.

An Australian judge is said to have ruled 'overwhelmingly' in favour of Djokovic at the appeal hearing against his visa cancellation on Monday – so what message would the federal government now be sending if they were to just ignore that ruling and attempt to deport Djokovic anyway?

It would be nothing but political point-scoring by the government and Australian prime minister Scott Morrison, to make an example of such a high-profile figure, especially with a federal election around the corner, with tensions around Covid and vaccinations high in Australia.

Rafael Nadal, perhaps Djokovic's greatest career foe, called the developing situation in Melbourne 'a circus' as he joked he'd rather the world No 1 not compete in the Australian Open as both men bid to win their 21st Major singles title Down Under.

Nadal told Spanish radio station Onda Cero: "Whether or not I agree with Djokovic on some things, justice has spoken and has said that he has the right to participate in the Australian Open and I think it is the fairest decision to do so, if it has been resolved that way. I wish him the best of luck.

"On a personal level, I'd much rather he didn't play!

"It's sports, many interests move around it, on a general level, at an economic, advertising level. Everything is much better when the best can be playing.

"The most important institutions in the world say that the vaccine is the way to stop this pandemic and the disaster that we have been living for the last 20 months."

Kyrgios a doubt for Australian Open

Away from the Djokovic drama, one of the Serb's rivals, Nick Kyrgios, confirmed he has tested positive for Covid and is a doubt for the first Grand Slam of the year.

Hello and welcome to our live blog covering Novak Djokovic's bid to remain in Australia ahead of the season-opening Grand Slam in Melbourne, which begins next Monday.

The latest reports are that the government intends to exercise a loophole in the law, which would allow them to deport Djokovic irrespective of a judge ruling overnight that the world No 1 men's tennis player had doen everything asked of him in his bid to prove his vaccine exemptions status.