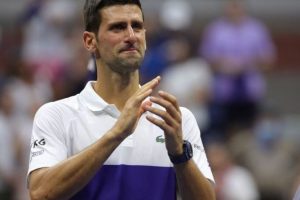 Novak Djokovic has been labelled “selfish” as he continues his fight to play in the Australian Open. The saga regarding the Serbian’s medical exemption has proved a divisive one, with his original announcement that he would be competing in Melbourne sparking a vitriolic reaction down under.

Further twists were to follow though, with the world no 1 having his visa revoked by border force officials after landing in Melbourne Airport, and after hours of interrogation, it was confirmed he would have his visa revoked.

However, his legal team managed to delay plans to have him deported by appealing the decision, and after Djokovic spent five nights in a Government detention hotel in Carlton, Victoria, on Monday a judge ruled in his favour.

That’s proved far from the end of the matter though, with allegations emerging that Djokovic, who was granted an exemption on the basis he tested positive for Covid on December 16, had flaunted isolation rules afterwards.

He was also accused of providing false information on his immigration forms, and has since released a statement explaining the discrepancies – blaming his agent for the visa error.

His ordeal has been met with contrasting views from fellow professionals, with Rafael Nadal pointedly saying Djokovic could have avoided such problems by simply being vaccinated against Covid-19.

Andy Murray had also called for his old rival to explain his apparent nonchalance towards his positive test, but Nick Kyrgios however, a vociferous critic of Djokovic, has been critical of Australian authorities for their perceived mistreatment of the Serbian.

And now Portuguese player Joao Sousa has branded Djokovic “selfish” for not getting the vaccine and yet turning up at the Australian Open anyway.

Sousa, who had to qualify to compete in the first Grand Slam of 2022, suggested some players have had to get the jab despite not wanting to just so they can continue to compete in tournaments.

He told A Bola: “I respect that he fights for what he believes and I can be empathetic with what he is going through in Australia.

“But it’s a bit selfish from him to arrive here as the only player unvaccinated. It’s tough for us players to accept that.

“Many players, not in my case, didn’t want to get vaccinated and were forced to do it to be able to play tournaments. He is finding a way around those rules.”

Whether Djokovic is able to remain in Australia for the tournament depends on immigration minister Alex Hawke, who still retains the power to revoke his visa for a second time.

He is expected to announce his decision on Thursday, having taken extra time to investigate the falsities on Djokovic’s paperwork.

The 34-year-old had flown out to Australia on the brink of history, a clear favourite to win the tournament and claim an unprecedented 21st Grand Slam title, taking him clear of Nadal and Roger Federer.

The uncertainty over his participation has led to organisers delaying the main draw.