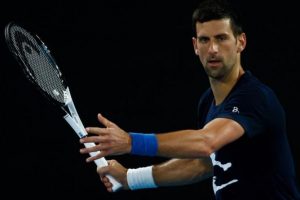 Novak Djokovic is one of just three players inside the ATP’s top 100 who have not been vaccinated. The ATP released a statement earlier this week revealing how many of their top stars have received the jab.

It reads: “ATP continues to strongly recommend vaccination for all players on the ATP Tour, which we believe is essential for our sport to navigate the pandemic.

“This is based on scientific evidence supporting the health benefits provided and to comply with global travel regulations, which we anticipate will become stricter over time.

“We are encouraged that 97 percent of the Top 100 players are vaccinated leading into this year’s Australian Open.”

CNN reported that Djokovic is the only player in both the men’s and women’s singles draw at the Australian Open to not have been inoculated.

The Serbian is against taking the coronavirus jabs and received a medical exemption to play in the first grand slam of the year.

The chaos began when he had his visa rejected and after Australian Border Force declared Djokovic had provided insifficuoet evidence for his exemption.

He was then detained at a quarantine hotel for several days and while awaiting the result of his appeal, which was successful, and the visa cancellation was overturned.

The world number one was then released and began to train for the major, and is scheduled to begin his campaign on Monday.

Another twist was to follow as Djokovic’s visa was cancelled again, by Australia’s Immigration minister Alex Hawke, only for his legal team to promptly launch another appeal against him being deported.

Earlier today Djokovic was detained by Border Force again following an interview at an undisclosed location.

During a hastily arranged late night court hearing, representatives for the Serbian and Immigration Minister Alex Hawke confirmed he would not be detained on Friday night, but would be in detention following an interview at the Immigration office at 8am local time on Saturday.

Both representatives also agreed to a Sunday appeal hearing, and Djokovic is expected to spend the night in a detention hotel before appearing to give evidence via video link the following morning, before his fate is decided.

Hawke said he canceled the visa on “health and good order grounds, on the basis that it was in the public interest to do so.”

His statement also read: “I consider that Mr Djokovic’s ongoing presence in Australia may lead to an increase in anti-vaccination sentiment generated in the Australian community, potentially leading to an increase in civil unrest of the kind previously experienced in Australia with rallies and protests which may themselves be a source of community transmission.

“Mr Djokovic is … a person of influence and status.

“Having regard to … Mr Djokovic’s conduct after receiving a positive Covid-19 result, his publicly stated views, as well as his unvaccinated status, I consider that his ongoing presence in Australia may encourage other people to disregard or act inconsistently with public health advice and policies in Australia.’

Djokovic’s lawyers are arguing that his visa was revoked on the grounds his presence at the high-profile tennis tournament might excite anti-vaccination supporters, and not because there were discrepancies with his visa.