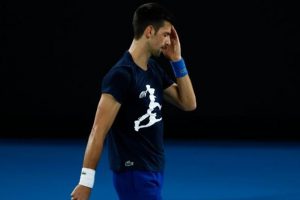 A directions hearing is set to take place as it appears Novak Djokovic’s lawyers are appealing after his Australian visa was cancelled for a second time. Immigration Minister Alex Hawke announced the decision on Friday, saying he was revoking the star’s visa “on health and good order grounds, on the basis that it was in the public interest to do so”. Judge Anthony Kelly, who overturned the initial decision to cancel Djokovic’s visa, is set to review the case and consider whether further action can be taken by the Serb’s lawyers to appeal.

Djokovic is set to learn what his next steps are after having his visa cancelled for a second time.

The nine-time Australian Open first had his visa revoked when he arrived in Melbourne last week with a medical exemption granted by Tennis Australia.

But he appealed the decision and won on the grounds of “procedural fairness” after the federal government conceded they had treated him unfairly at the border and failed to give the Serb enough time to provide more proof of his exemption.

Judge Anthony Kelly presided over the appeal hearing on Monday, and will now conduct a directions hearing after the Immigration Minister cancelled Djokovic’s visa for a second time.

The hearing will not be an official appeal, but instead will offer Djokovic and his lawyers an idea of what they can do next in response to his cancelled visa.

The review hearing is the beginning of a court process, and will allow Judge Kelly to consider whether further steps can be taken in the case of Djokovic vs the Minister for Immigration.

It is set to take place at 8.45pm Melbourne time – less than three hours after Mr Hawke’s decision was announced.

Djokovic’s lawyers were verbally informed of the decision at 5.35pm and it was announced at 5.52pm, before his legal team received written notification at 6.03pm.

Announcing the decision earlier on Friday, the Immigration Minister said: “Today I exercised my power under section 133C(3) of the Migration Act to cancel the visa held by Mr Novak Djokovic on health and good order grounds, on the basis that it was in the public interest to do so.

“This decision followed orders by the Federal Circuit and Family Court on 10 January 2022, quashing a prior cancellation decision on procedural fairness grounds.

“In making this decision, I carefully considered information provided to me by the Department of Home Affairs, the Australian Border Force and Mr Djokovic.

“The Morrison Government is firmly committed to protecting Australia’s borders, particularly in relation to the COVID-19 pandemic.

“I thank the officers of the Department of Horne Affairs and the Australian Border Force who work every day to serve Australia’s interests in increasingly challenging operational environments.”

Australia’s Prime Minister later announced his support of the decision, and gave some insight into what the “public interest” was in deporting Djokovic.

Scott Morrison said: “This pandemic has been incredibly difficult for every Australian but we have stuck together and saved lives and livelihoods.

“Together we have achieved one of the lowest death rates, strongest economies and highest vaccination rates, in the world.

“Australians have made many sacrifices during this pandemic, and they rightly expect the result of those sacrifices to be protected. This is what the Minister is doing in taking this action today.”