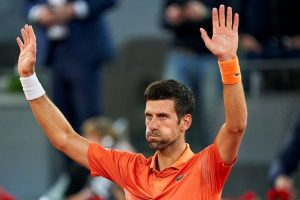 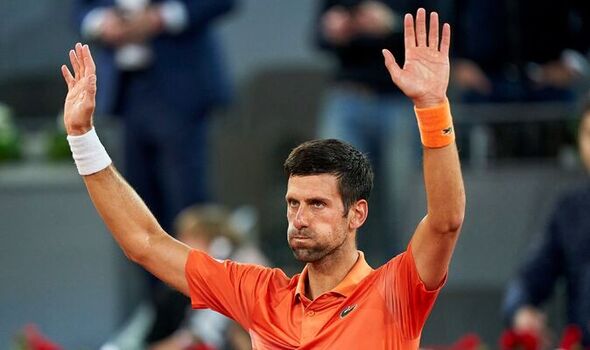 Gael Monfils has hailed Novak Djokovic’s ‘less pleasant’ play style after the dominant Serb swept him aside in their Madrid Open last-16 clash on Tuesday. Djokovic recorded an impressive 6-3 6-2 triumph in just under an hour and a half and is on a collision course with long-time rival Rafael Nadal in the Spanish capital.

After the match, Monfils labelled the 34-year-old’s style ‘less pleasant’ and praised his performance on his debut on Madrid clay. Despite acknowledging Djokovic hasn’t been at his best in 2022 so far, he believes he is consistently improving as the French Open grows closer.

He said: “It’s hard for me to judge him well. Novak Djokovic does things that are less pleasant for me. I make him play well. He pushes you to put a little more, to take the ball a bit earlier, to hit a little harder,” Monfils said. “He’s been playing less well since he came back because he [hasn’t won a title], but he’s still playing very well!”

JUST IN: Nadal and Djokovic to lose out if they win French Open despite boost

“So when we say it’s takeable… It’s solid! You still have to play a big game to beat him,” Monfils continued. “The guy remains world number one. He has fewer wins than usual, but he still has a lot. I didn’t make the final in Belgrade, [he did]. He is playing better and better. Today, it was simple and effective. Me, I played an average match.”

Djokovic has endured a troublesome 2022 season so far, stemming from his vaccination status after his deportation from Melbourne in January prevented him from playing in the first Grand Slam of the year. And his form has stumbled since the ordeal, suffering a first-round exit at the Monte-Carlo Masters and almost falling at the first hurdle in his home tournament, the Serbia Open.

But Djokovic looked as convincing as ever at the start of his fourth tournament of the campaign and will face 12th-seeded Pole Hubert Hurkacz in the quarter-finals on Friday. He received a bye through the second round after Andy Murray withdrew from their highly-anticipated meeting due to illness.

However, while fans were robbed of the iconic pair renewing their rivalry for the first time in five years, Nadal could await Djokovic in the semi-finals. And it would be a refreshing taster of what potentially awaits at this year’s French Open after Djokovic dethroned the Spanish ace last June.