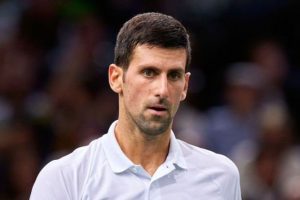 Djokovic's brother says star is back on tennis court

Novak Djokovic has been warned that he could lose out on £22million worth of sponsorship deals if he continues to embrace his anti-vax status. The tennis sensation has been in the headlines over the past few days after his visa was cancelled over a dispute involving his medical vaccine exemption.

Djokovic has been an outspoken critic of mandated vaccines in the past, and up until this week, his vaccination status remained unknown.

But he revealed to Australian officials that he had not been jabbed, which was part of the reason why his visa exemption caused a stir among the Australian public.

The 34-year-old was kept in a Melbourne detention centre for several days until the case was resolved, which prompted outrage from his family and fans.

A judge ordered the Serb to be let free on Monday after a hearing on his visa cancellation.

For numerous reasons, however, Djokovic may not be out of the woods yet.

For one, Australia’s immigration minister maintains the power to immediately re-detain the 20-time Grand Slam winner.

Djokovic’s family, still upset at the treatment he has received since attempting to enter the country last week, have subsequently appealed for others to help ‘protect his human rights’.

But even if he is able to compete at the Australian Open, The Telegraph claim that his £22m worth of sponsorship deals could be at risk.

The Serbian tennis ace is believed to earn far more from endorsements than he does from competition winnings.

And although Hublot have refused to criticise Djokovic for what they termed his ‘personal decisions’, marketing expert Marcel Knobil believes that others may not be so lenient.

“I don’t think his bank manager need worry at the moment,” he said.

“However, his sponsors will definitely be keeping an eye on how things unfold.

“I doubt his sponsorships are currently under threat.

“The big concern for various sponsors will be if he becomes perceived as a major anti-vaccination advocate and the anti-vax poster boy.”