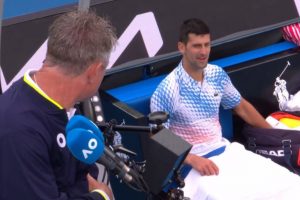 Novak Djokovic was unhappy and called out the umpire as he received a time violation during his Australian Open third-round match with Grigor Dimitrov. The Serbian has battled a hamstring injury that was evident in the first set, but fumed at the official and jeered at him during the match.

Djokovic broke his opponent in the first set, but struggled to get it over the line and was incensed after he was called for a time violation on a break point, claiming that it “decides” the set.

“Deciding an entire set, on a break point. You give me a time violation. Well done,” Djokovic said to the umpire in the latest outburst at the officials in the Major, as he was a break point down before the duo went into a tiebreaker.

Eurosport commentator Simon Reed noted how often that time violations had been perplexing the players at the tournament. “The umpires is anuthing the last two months have been erring on the side of the players,” Reed said.

Former British No. 1 Tim Henman added: “For me, when you look at the time it’s 25 seconds between points so therefore the 25 seconds should start when the point finishes but that is not the way it’s been policed by the umpire.

“But Djokovic has been complaining there about getting a time violation on his serve because it was the first time he had been a little bit close to the 25 seconds and perhaps feels he should have got a soft warning first of all.”

Djokovic went on to win the tiebreak in a 77-minute set, though he fell to the ground amid a hamstring injury that has been plaguing him at the Australian Open.

Dimitrov survived a fourth set point to level at 6-6, but the 35-year-old took the tiebreaker 9-7 with an acrobatic volley, before a medical time out was called for the Serb.