Novak Djokovic caught up in another ‘mysterious bottle’ controversy 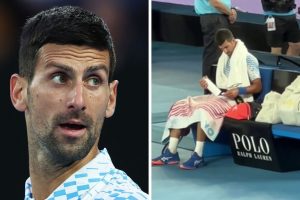 Novak Djokovic has been accused of breaking tournament rules at the Australian Open amid a fresh storm over a mystery drink he received during his second-round victory over Enzo Couacaud. The incident comes after Djokovic suffered a surprise defeat to Holger Rune at the Paris Masters back in November, after which a video of his physiotherapist mixing him a drink raised plenty of eyebrows.

Djokovic is one of just a few big-name players left at the Australian Open, with the likes of Rafael Nadal, Daniil Medvedev and Andy Murray having been knocked out in the first week of the tournament. However, the Serb’s impressive run to the fourth round has been somewhat tempered by another incident relating to a drink, with a viral video having sparked no shortage of discussion on social media.

The clip showed a member of Djokovic’s team passing a bottle to a tournament official, who then handed it to the Serb during a break in play as he battled against Couacaud in the second round in Melbourne. Djokovic was seen carefully reading the label on the bottle, which saw many fans on Twitter raise concerns over whether he had broken any rules in relation to when and where players can be coached during matches.

Players are only allowed to communicate verbally with their team when they are on the same side of the court, while signals must be used if they are on opposite sides. This was the case when the footage of Djokovic was taken, leading some viewers to question whether his team had scribbled a message on the bottle for him to read before restarting play.

One tennis fan on Twitter by the name of @shaposbh said: “Why is it that when something ‘shady’ happens it’s always Novak’s team? They need to learn not to look so suspicious all the time.” @simmyxv expressed a similar view by tweeting: “Why is it that whenever there is something sneaky going on Novak’s always at the centre of it?”

Others alluded to Djokovic’s previous bottle controversies, with @LoveDavidx adding: “Then they say we are just seeing things. Just like that other video. But let me sit here and mind my business.”

Some viewers were even stronger in their criticism of Djokovic including @JordanHolt23, who said: “Want him out the tournament, like legit what the actual,” while @AnimalPower13 fumed: “I don’t care if it is illegal or not, but this shouldn’t be allowed at all.”

“What on earth is going on here with the supervisor involved. Anything goes it seems,” said @Rafan2500, with @Sztr11 asking: “Again… enough is enough… why Djokovic is above all rules?”

However, a number of fans jumped to the defence of the Serb by playing down the possibility of a potential rule infraction, with @macovi83 stating: “Lots of hater comments but no one answers the question, the rule speaks of verbal indication and signs, not short notes on a piece of paper. What is not prohibited is allowed as in any law.”

@rubliever87, meanwhile, said: “It is clear that he is not hiding any messages, he sticks a label on the bottle in a super visible place, which Novak barely glanced at. I think he puts what it is, so he knows when and how much to drink during the game. They always have more than one drink and alternate them.”

Djokovic was involved in another media storm at Wimbledon last year when he appeared to inhale something from a drinks bottle, which also managed to get people talking on social media given the bizarre nature of the incident. It remains to be seen whether any more strange moments involving Djokovic will arise between now and the end of the Australian Open, with the Serb chasing his 22nd career Grand Slam title in Melbourne this week.