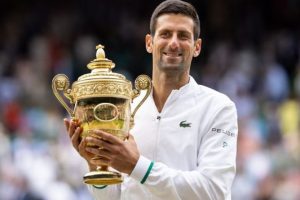 Novak Djokovic has spoken out about his Olympic chances as he sets his sights on winning the singles at Tokyo 2020. The world number one is aiming to complete the calendar-year Golden Slam, winning all four majors and Olympic gold in one year, after sweeping the Australian Open, Roland Garros and Wimbledon so far in 2021.

The Serb recently captured his 20th Grand Slam title at Wimbledon, putting him on par with Roger Federer and Rafael Nadal for the most singles majors won by a man in history.

Despite his list of accomplishments, which includes winning every single Grand Slam and Masters 1000 tournament twice, a gold medal has always eluded the top player.

Although he’s never captured the title at the Olympics, Djokovic says he’s feeling “confident” ahead of Tokyo 2020 and isn’t shying away from sharing his desire to bring home a medal for Team Serbia.

According to Tennis World, the world number one told Sasa Osmo: “It is grueling (schedule), but I am confident because of all of the wins this season. Winning a medal is my goal, and it is not a secret I am aiming for the gold.”

Djokovic had initially cast some doubt over whether he would even enter the 2020 edition of the postponed games, but recently took to Twitter to announce that he would be travelling to Tokyo to represent Serbia.

He wrote: “I am very proud to pack for Tokyo and join our national team in the fight for the brightest medals in the Olympic arenas. For me, the game for Serbia has always been a special joy and motivation and I will do my best to make us all happy! Let’s go.”

The tennis event at the Olympics has already been hit by a string of withdrawals by high profile names on both the men’s and women’s side, with Federer, Nadal, Serena Williams and Victoria Azarenka among the big names to have pulled out of the games.

Although the lack of top players coupled with no crowds able to attend in Tokyo have caused many to put an asterisk by the result of the event before it has even started, the 20-time Grand Slam champion isn’t worried about the extra factors.

“I’ve met Blanka Vlašić recently and she told me that in the future people won’t remember the conditions or whether there were people in the stands, but who has won medals,” Djokovic said.

The tennis event at this year’s Olympics begins on Saturday (July 26), less than two weeks after the 34-year-old captured the title at the All England Club with an impressive win, coming from a set down to beat Italian Matteo Berrettini 6-7(4) 6-4 6-4 6-3.

Despite the quick turnaround and the change in conditions, the top-ranked player is still the favourite to win both the Olympics and the upcoming US Open, which begins late next month.

Winning both, alongside his other three Grand Slam titles this season, would arguably make him the greatest male player of all time and cement him firmly at the top of what’s known as the ongoing ‘GOAT debate’.

Although the Serb would also need to win the title in Flushing Meadows at the end of summer, he’s only looking to the Olympics right now and refuses to jump the gun on achieving the Golden Calendar Slam.

According to Sasa Ozmo and Tennis World, he said: “After Tokyo 2020, I will start to think about the US Open.”

Ahead of the upcoming games, he also added: “Representing your country at the Olympics is a feeling like no other.”