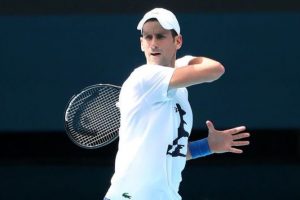 Novak Djokovic has been given two alternatives if he isn’t allowed to take his place at this month’s Australian Open. The Serbian tennis star saw his visa cancelled for a second time on Friday after a judge had ruled to overturn the original decision to ban him from the country earlier this week.

Djokovic is still currently set to take on fellow Serb Miomir Kecmanovic when the first Grand Slam of the year gets underway on Monday.

But he will now be forced to face officials on Saturday after Australia’s immigration minister Alex Hawke took it upon himself to retract the player’s visa once again.

And former Australian tennis star Darren Cahill, who now works as a tennis analyst for ESPN, says the debacle has been a mess.

“Novak, TA, Vic Gov, Federal Gov. It should’ve been a hard rule entering this country considering what the folks have been thru.

“Get vaccinated and come play the AO, or if not maybe see you in 23′. No wiggle room.”

Djokovic arrived in Melbourne over a week ago and was interviewed by Australia Border Force upon touchdown.

The player had been given a medical exemption to play at the Australian Open as he has not been vaccinated against COVID-19.

But Border Force officials deemed his exemption to be invalid and moved him to a state-backed immigration facility, where he stayed for days until his appeal was heard on Monday.

Djokovic took to the tennis court to begin his Australian Open preparations after Judge Anthony Kelly ruled in his favour at the hearing.

But the 34-year-old could still miss out on playing at the tournament.

“Today I exercised my power… to cancel the visa held by Mr Novak Djokovic on health and good order grounds, on the basis that it was in the public interest to do so,” Hawke said in a statement.

“Australians have made many sacrifices during this pandemic, and they rightly expect the result of those sacrifices to be protected,” he added.

Djokovic is the most successful player the Australian Open has ever seen after winning it a record nine times.

The veteran has won the last three editions of the tournament and hasn’t lost a match since losing in the fourth round in 2018.

He is the favourite to win the trophy once again this year – but is now facing another anxious wait to find out if he is able to compete.