Jordan Thompson has repaid Lleyton Hewitt’s faith to perform a key role in Australia beating the Netherlands to reach the Davis Cup semi-finals for the first time in five years.

Hewitt brought Thompson into his squad only this week but sent him out in the No.2 singles spot ahead of Thanasi Kokkinakis, who has played only two singles matches since the US Open in late August. 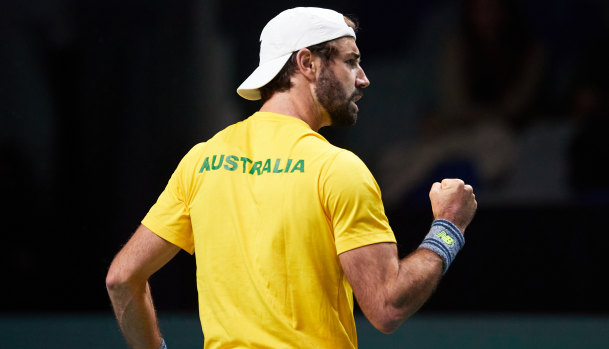 Jordan Thompson set up victory for Australia with a three-set win in the No.2 singles.Credit:Getty Images

In the 28-year-old’s first Davis Cup appearance since March 2020, he overcame dropping the first set to outlast Tallon Griekspoor 4-6, 7-5, 6-3 in a gruelling contest that lasted six minutes short of three hours.

Australia will take on the winner of Croatia and host nation Spain in two days’ time for a Davis Cup final spot, which would match the feats of their compatriots in the Billie Jean King Cup barely a week ago.

Thompson was the latest Australian to step up in Nick Kyrgios’ continued absence from Davis Cup duty.

He saved all eight break points he faced across a pressure-filled final two sets, including crucially rallying from 15-40 in the fifth game of the third set – fittingly saving the second one at the net, where he enjoyed plenty of success.

That followed him staving off break points in three separate service games in the second set, only to then capitalise on three straight Griekspoor errors before forcing a decider with a backhand that hugged the line. The world No.84 scored the match-winning break in the next game, and celebrated his victory by passionately pointing to the tattoo on his right bicep of Australia’s Coat of Arms next to the Olympic rings. 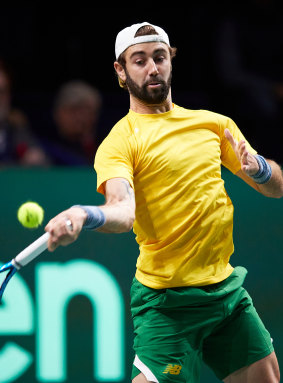 “Davis Cup is something special and when you’re playing for your country; it’s not like individual tennis, so you feel that extra pressure,” Thompson said.

“There’s no other thing like it. I was a bit tight to start, and he was playing great tennis [and] a big brand of tennis. But I hung in there, served quite well, and I got a bit more aggressive as the match went on.

“I found myself at the net a few times and knocked off a few volleys, which on the big points, they counted.

“When I was serving for the match, usually I’ll get pretty nervous, but the crowd got up, and I was thinking, ‘There’s no place I’d rather be’. That’s the way I’ve lived my life and I want to be in these moments.”

The tenacious de Minaur showed all his fighting qualities to also battle back from a set down against his 35th-ranked opponent, who made last year’s US Open quarter-finals.

He dealt with a power deficit as usual and wore 29 van de Zandschulp winners but started his comeback by book-ending breaks in the second set. 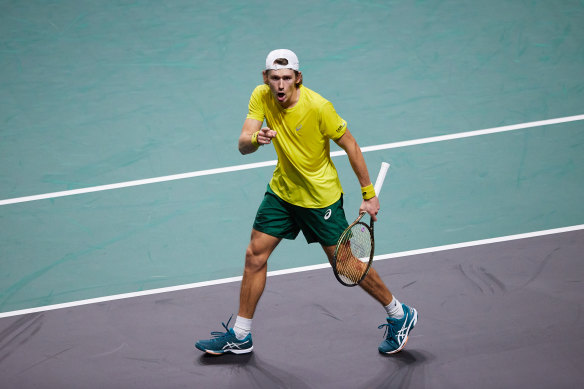 Alex de Minaur celebrates his win in the quarter-final against the Netherlands.Credit:Getty Images

The work was far from done, with de Minaur twice falling in 0-30 holes in the final set then saving a second break point to go 5-4 up in a marathon ninth game after a trademark van de Zandschulp rocket winner.

But van de Zandschulp wilted spectacularly in the following game to drop serve to love, sealing Australia’s semi-final berth when he tugged a backhand wide.

De Minaur’s mother, Esther, burst into tears in the crowd after her son’s latest heroic performance as he rejoiced with his teammates.