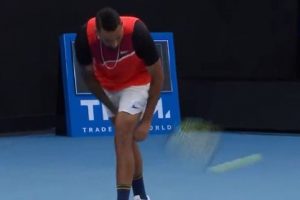 Nick Kyrgios surprised Britain’s Liam Broady with an underarm tweener serve in the first ten minutes of their first-round Australian Open clash. The 26-year-old had already broken to start the match, and pulled out a new trickshot after making both the tweener and the underarm serve his signature shots individually, much to the delight of the Melbourne night session crowd.

Kyrgios was in doubt to make the Australian Open after suffering with a mystery illness that kept him out of the Melbourne ATP 250, later testing positive for Covid.

But the world No 115 recovered in time to compete, and was drawn against Britain’s Liam Broady, who qualified for the Australian Open main-draw for the first time in his career.

Playing the night-session in front of a rowdy crowd on his favourite court – John Cain Arena – the Aussie got the show started immediately with his trademark antics, breaking Broady in the first game.

In the very next game, the 26-year-old pulled out a new trickshot, combining two of his trademarks as he hit an underarm tweener serve.

Kyrgios successfully threw his opponent off with the underhanded, through-the-legs service motion, as Broady hit his return long and gifted the Australian a love-hold.

The crowd went wild as the former world No 13 encouraged them to get on their feet.

Kyrgios has hit headlines in recent days for defending world No 1 Novak Djokovic over his visa saga.

The nine-time Aussie Open champion won an appeal on fairness grounds after having his visa cancelled when he landed in Australia two weeks ago, but last Friday the Immigration Minister used his personal powers to revoke Djokovic’s visa once again.

He first stood up for the 20-time Major champion two weeks ago, when Djokovic was detained in a government hotel while awaiting his appeal hearing.

“Look I definitely believe in taking action, I got vaccinated because of others and for my mums health, but how we are handling Novak’s situation is bad, really bad,” Kyrgios wrote on Twitter.

“Like these memes, headlines, this is one of our great champions but at the end of the day, he is human. Do better.”

The six-time title winner addressed the situation once again after Djokovic won his first appeal to have his visa cancellation quashed, saying: “I feel quite embarrassed as an Australian athlete who’s seen what this guy has done for us and for the sport. I just don’t think it’s right how we’re handling it, but the media loves to do that, loves to divide.”

The 26-year-old, who has previously been critical of Djokovic and called him a “strange cat”, spoke about the fiasco on his No Boundaries podcast and revealed the world No 1 had reached out to him via Instagram, to thank him for his words of support.

“I was not the one he was expecting to go out in the media and have his back. As a human, he’s obviously feeling quite alienated in all of this,” Kyrgios admitted in the podcast.

“As a human, that’s a dangerous place to be in – when you feel like the world is against you, like you can’t do anything right.

“I understand the anger towards him for not being vaccinated and getting a medical exemption, but if you look at it on face value, he’s got his paperwork.”

Speaking about their new-found “bromance”, the Aussie added: “Novak has reached out to me personally on Instagram, saying: ‘Thank you for standing up for me’.

“Me and Novak have a bromance now, he’s back in detention and it’s f*****. We are boys now. I can’t wait till the Aussie summer is over and we can play ball.