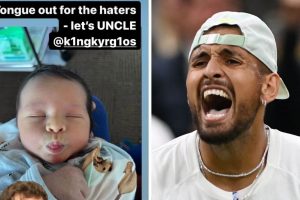 Nick Kyrgios shared an adorable picture of his newborn nephew after the Australian star defeated Stefanos Tsitsipas in the third round of Wimbledon. Unsurprisingly the clash between the pair was a dramatic one, full of controversy throughout.

The four-set thriller on Saturday saw the former doubles partners argue throughout, as they battled it out on Court One. Tsitsipas was also seen firing shots at Kyrgios on more than one occasion, before the Greek star received a warning for hitting a spectator with a stray shot after losing a point.

Within all the chaos it was Kyrgios who prevailed to the round of 16, as he came away with a 6-7 6-4 6-3 7-6 victory. Cheering on the 27-year-old back home in Australia was the tennis star’s family, including the latest edition – his newborn nephew.

Kyrgios’ brother Christos shared the cute snap of the newborn on Instagram with his eyes closed and his tongue sticking out. Along with the baby picture, Christos added the caption: “Tongue out for the haters – let’s [go] uncle @k1ngkyrg1os.”

JUST IN: Rafael Nadal sends message to Roger Federer after causing a storm at Wimbledon 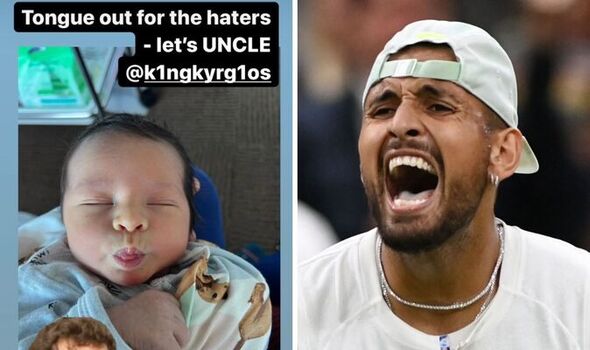 After his heated battle, the Australian star had some strong words for Tsitsipas – outlining the fact that he had now defeated him twice in as many weeks. Kyrgios said: “I would be pretty upset if I lost to someone two weeks in a row as well. Maybe he should figure out how to beat me a couple more times first.”

His comments came after Tsitsipas accused Kyrgios of ‘constant bullying’ whilst out on the famous Wimbledon grass. Taking aim at the 27-year-old, the Greek star told the media: “He bullies the opponents. He was probably a bully at school himself. I don’t like bullies. I don’t like people that put other people down. 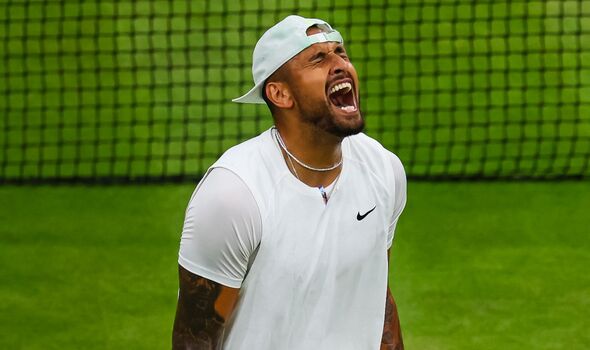 “He has some good traits in his character, as well. But he also has a very evil side to him, which if it’s exposed, it can really do a lot of harm and bad to the people around him.” Tsitsipas’ comments were then put to Kyrgios by journalists afterwards, to which he was quick to brush off.

“He was the one hitting balls at me, he was the one that hit a spectator, he was the one that smacked it out of the stadium,” commented the world No. 40. “I didn’t do anything. Apart from me just going back and forth to the umpire for a bit, I did nothing towards Stefanos that was disrespectful, I don’t think. I was not drilling him with balls.”