The wave of adulation Stefanos Tsitsipas is riding at Melbourne Park is a familiar sensation for former Australian Open finalist Marcos Baghdatis, who retains great affection for the city.

The first Cypriot to reach a grand slam final when beaten by Roger Federer in the 2006 Australian Open decider, Baghdatis was an extremely popular player in Melbourne who at one stage had a souvlaki named after him in a city restaurant.

He won the Australian Open boys’ title in 2003. In his first senior appearance, he came through qualifying to reach the fourth round before running into Federer in 2005.

In 2008, he featured in a famous moment as part of the five set epic against Lleyton Hewitt which finished 4.34am, the latest ever for a grand slam tennis match.

The 37-year-old, who will feature in the Legends tournament later this week, said the support he received from the Greek community was a factor in his career-best efforts here.

“From the first moment that I came here, something clicked with the city, with the people, with the fans, I just loved it here,” he said.

“They have a big community that follows their Greek athletes and that is what they are doing to Stefanos too, which is great to see. 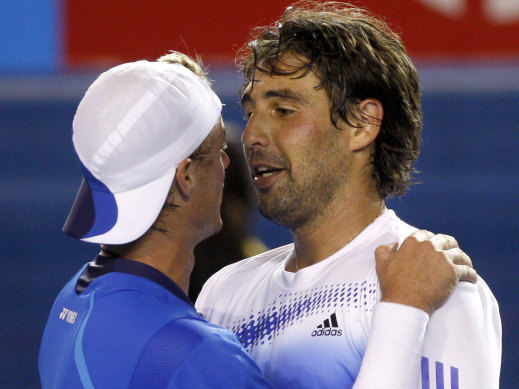 Hewitt and Baghdatis embrace after their 2008 marathon match.Credit:AP

“This is where I had my best emotions, the best success of my career. To be here on an invitation, there is no way I could have said no. It is an honour to be back.”

A string of late finishes at Melbourne Park over the first week of the Australian Open has evoked memories of the third round clash between Baghdatis and Hewitt.

Andy Murray and Thanasi Kokkinakis fell 30 minutes shy of setting a new record in a match that finished at 4.05am on Friday. 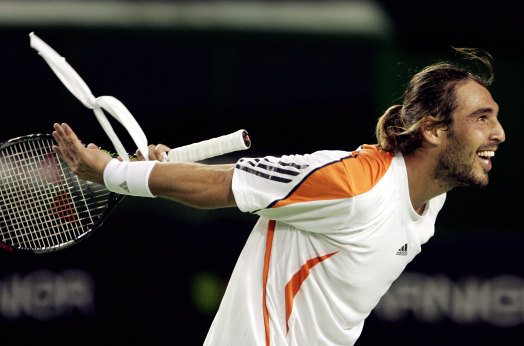 Baghdatis was a crowd favourite in Melbourne.Credit:AP

On Monday morning, Victoria Azarenka progressed to a quarterfinal against Jess Pegula by defeating Lin Zhu in a match that finished after 2am.

Similarly to those matches, the decision to start the clash between two former Australian Open finalists in Baghdatis and Hewitt in 2008 near midnight created great discussion.

A semi-finalist at Wimbledon in 2008, Baghdatis was frustrated at the time given the hour but said the memories he has of the match are among his most treasured now.

“I remember after that match, going back to the hotel and people are coming down to breakfast and it was an experience,” he said.

“It is something you don’t see every day. I lived it. That is how I see it in my head now. Of course … it is tough when you are on tour, but shit happens.

“I feel honoured, especially to play a long match like that against Lleyton Hewitt and (play in) the latest match ever.”

Baghdatis, who reached No.8 in the rankings but later battled injuries during a career that finished in 20019, featured in another notorious moment in Melbourne.

In a minute of madness in 2012 during a match against Stan Wawrinka, Baghdatis smashed four racquets. The tantrum was considered out of character given his amiable nature.

He was fined $1250 for an incident in which, after his initial outburst, he took three racquets from his bag, with two of them still wrapped in plastic, and obliterated them on the court.

Asked on Monday whether he was asked about his appearance in the Australian Open final or the racquet smashing, Baghdatis answered succinctly.

“More the final, but the racquet does come a lot. A lot. Yes,” he said.

The 37-year-old believes Tsitsipas, who has reached three semi-finals in Melbourne, will set a new mark for Greek tennis.

“If he keeps fit and is not injured … he is going to become the number one in the world soon,” he said.