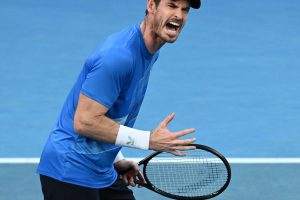 Andy Murray is out of the Australian Open after losing 6-4,-6-4, 6-4 to Taro Daniel in the second round in Melbourne.

Despite battling throughout, the Scot was unable to break his way into the game as the Japanese star went on to prevail with an impressive straight sets victory.

After a remarkable first round victory over Nikoloz Basilashvili, Murray returned to the Melbourne court with the hope of replicating some of the magic he showed in his five-set opener on Tuesday.

However things got off to a tricky start for the Brit, as he became the first man to lose his serve in the match, allowing Daniel take an early 3-1 advantage in the opening set.

Murray then quickly rallied back to draw things back at 3-3, but once again went on to give his serve away, which in turn went on to cost him the opener 6-4.

The fact the two-time Wimbledon champion was even competing in Melbourne was nothing short of remarkable, after the Brit had thought his career was over at the very same venue three years prior.

Into the second set and sadly it was more of the same again for Murray, as he squandered his serve early on once again to give the Japanese a foot-hold on the match for a second time.

After falling 2-1 down following Daniel’s break, the three-time Grand Slam champion was unable to return the favour as a gutsy showing from the Japanese international saw him hold serve to take the second by the same score, 6-4.

Like his impressive career comeback, Murray would need another stirring turnaround if he was to extend his stay, and tournament down under after finding himself two sets down.

And his reaction got off to the best possible start in the third set, as he clinched the first game, before importantly breaking serve in the next to put him in control for arguably the first time in the match.

Like set one and two though, the Brit lost his own serve in what seemed to be the cursed third game, before Daniel went back-to-back to level the set up at 2-2.

Of course losing his serve was now almost not an option, with Daniel just one set away from booking a spot in the third round.

However this dreaded break finally came in game nine, as the world No 120 frustrated Murray to take the ninth game of the third set to move him 5-4 ahead, and within touching distance of the next round.

Daniel then went on to claim the final game of the match to send him into third round of the event thanks to a straight sets win, despite a spirited effort from the former British and world No 1.