‘Months’ on the sidelines: Extent of Tomljanovic’s injury revealed

Australia’s top-ranked women’s player, Ajla Tomljanovic, faces months on the sidelines after surgery to fix the knee problem that caused her to miss the Australian Open.

The world No.35 revealed her prognosis on Saturday, after saying at the time of her withdrawal that she hoped “conservative methods” would work rather than an operation. 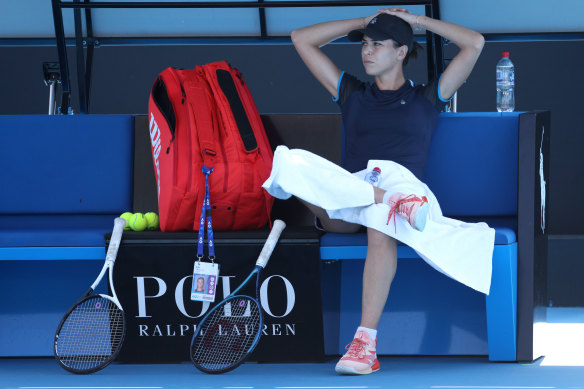 Ajla Tomljanovic will be off the court for “months”.Credit:Tennis Australia/Hamish Blair

“This morning I had a minor procedure done on my knee that went very well,” Tomljanovic posted on social media.

“Sadly I won’t be around these next few months, but I’m happy I did the necessary steps to get fully healthy.

“I can’t wait to get back out there. Appreciate all your sweet messages and words of support – [it] doesn’t go unnoticed.”

Tomljanovic’s knee issue “flared up” in December and resulted in her also pulling out of Australia’s United Cup campaign at the start of January.

She fought back tears when she withdrew only two days out from the Open, believing she was a “contender” after making two grand slam quarter-finals last year.

“If you ask me, this is probably the worst timing ever. I’m sure I would have said that even if it happened in six months [but] if I’m taking a 15-second pity party, this shouldn’t have happened now,” Tomljanovic said last weekend.

“It’s the time when I’m feeling my best self in every way; coming into a slam truly feeling like I deserve to be even a contender. I mean, I feel that way. I’m not coming out here and faking that.

“So, in a way, am I going to have to start from scratch? Probably not. It feels a little unfair, but life’s unfair. Part of our job; injuries will happen.”

Tomljanovic’s timeline for recovery means she will sit out a series of WTA 1000 events – the biggest outside of the grand slams – in Dubai, Indian Wells and Miami, and could also be in doubt for Madrid and Rome on clay in late April and early May.

The French Open starts on May 28, and her best result at the clay-court major is reaching the last 16 in 2014.