Former Australian Open champion and world No.1 Lindsay Davenport fears the first positive coronavirus case in professional tennis is just the tip of the iceberg and worries about "horror stories" emerging from fellow players across the globe.

Talented young Brazilian Thiago Seyboth Wild, whose last match was a loss to John Millman just 19 days ago in Australia's Davis Cup victory in Adelaide, revealed on social media that he was in self-isolation after contracting COVID-19. 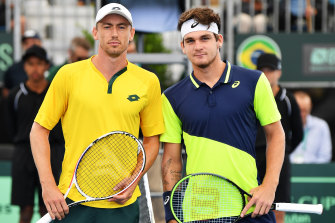 John Millman (left) and Thiago Seyboth Wild at the coin toss for their Davis Cup encounter in Adelaide in early March.Credit:Getty Images

"This is one of the problems that we're facing in tennis and why the delay is going to be really challenging," Annacone said.

"It's an individual, international sport. We are on planes SO much, travelling the globe, so many different continents so that not only are we susceptible but what we're finding out now is that there's a lot of pathways to pass this [disease] on to others.

"So we have to be really careful."

Although Seyboth Wild is officially the first tennis player to test positive to coronavirus, Australian Bernard Tomic 10 days ago reported to having "all the symptoms" before moving into self isolation in Miami.

"Look, let's be honest, there are a lot of tennis players that have done a lot of travelling this year," Annacone told the Tennis Channel.