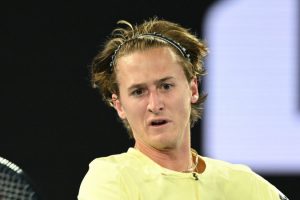 The American uprising is genuine – and so, too, is Sebastian Korda.

The son of 1998 Australian Open champion Petr Korda has been the source of endless hype, but there is an increasing amount of substance to go with it.

“It was an unbelievable match. I knew what I had to do, and I stuck with it, even when I was going up and down with my emotions, but I’m thrilled right now – I played amazing,” the 2018 Australian Open junior champion said.

Medvedev has now lost before the quarter-finals at his past three grand slams after ascending to the top ranking twice last year. This is his worst Open result since losing in the second round in 2018. 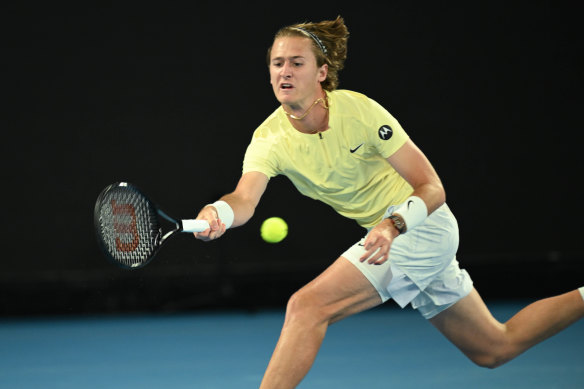 Korda is the first United States men’s player into the last 16 – a feat he already achieved at the French Open and Wimbledon – but there will be at least two countrymen joining him due to all-American match-ups.

Frances Tiafoe and Mackenzie McDonald exited the tournament on Friday, but an impressive eight Americans advanced to the round of 32, even with their No.1 player, top-10 star Taylor Fritz, suffering a shock loss to Australia’s Alexei Popyrin.

That depth in the US men’s game is raising hopes they can finally end the nation’s grand slam title drought, which extends to former world No.1 Andy Roddick’s 2003 US Open triumph.

Korda issued a warning to his tour rivals a fortnight ago when he reached the Adelaide final, where it took Novak Djokovic more than three hours to subdue him, including saving a match point. 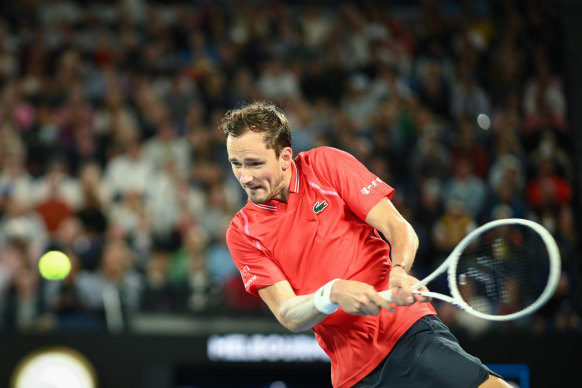 Daniil Medvedev plays in the third round of the Open.Credit:Eddie Jim

But it is doubtful the 22-year-old – ranked No.31 in the world but touted by Djokovic as a future top-10 player – ever played better than he did through the first five games against Medvedev.

Korda set the tone when he broke the Russian star in a 17-point opening game and had hit his seventh winner – while Medvedev was yet to get off the mark – by the first point of the next game in a scintillating start.

The seemingly effortless winners kept flowing, and he earned break points in each of Medvedev’s first three service games, looking to win the first set with a double-break 4-1 lead.

But Korda came crashing back to earth as quickly as he raced ahead, committing a swarm of errors – most off his backhand side. Medvedev pounced and quickly levelled the set at four-all, only for Korda to break once more, then give it straight back.

Korda displayed the ability to absorb disappointment against Djokovic in the Adelaide final and that came in handy again.

He snatched an early lead in the tiebreak and never trailed but repeatedly gave back the advantage before finally clinching a deserved one-set edge on his third set point after 85 minutes.

Korda made easier work of the second set and broke Medvedev to love to open the third, but just like the first set, there was a twist.

The world No.8 was back on level terms when his younger rival dumped a backhand into the net, leaving the door slightly ajar for the tournament’s latest two-sets-to-love comeback. 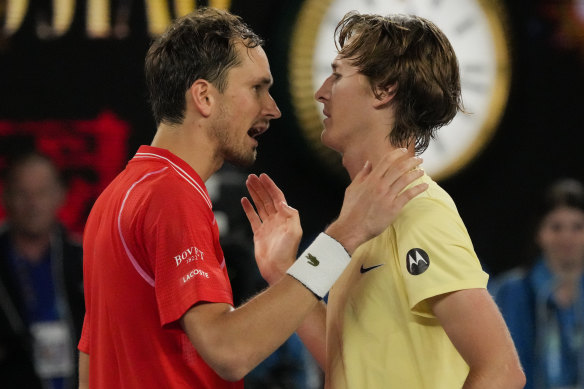 But Korda steadied to win his second tiebreak of the night and set up a fourth-round shot at No.10 seed Hubert Hurzacz, a five-set winner over Canadian Denis Shapovalov.

Sporting a well-manicured beard and clothes tailored to his athletic frame, Karen Khachanov proved himself an ice-cold spoiler of hype once again on Friday night at Melbourne Park. 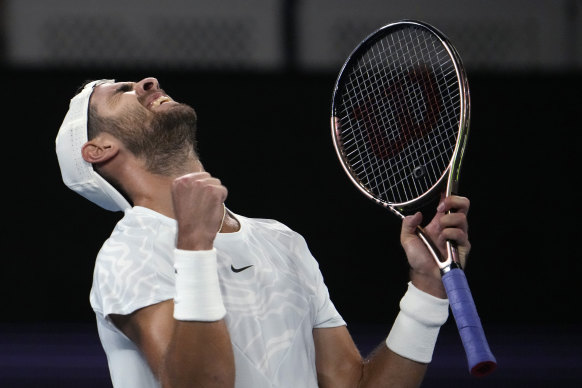 The fourth-set tie-breaker was a thriller, with Tiafoe holding a 6-1 advantage, only for the Russian to show remarkable resilience in reeling in the deficit in a high-class display.

Tiafoe has matured into a hot prospect on the tour. Charismatic and entertaining, the American possesses a beaming smile that lights up stadium courts around the world.

The Netflix star flashed all his charms again on Friday night. There were flushed forehands followed by fist pumps. He wore colourful clothes while cajoling the crowd into a frenzy.

But Khachanov is an old hand at dealing with the theatrics of rivals and the fickleness of fans. 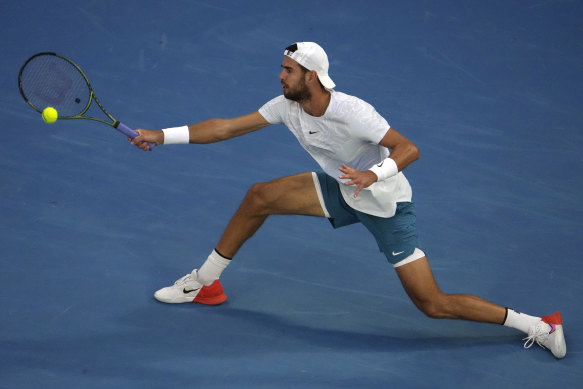 Karen Khachanov held his nerve in the final set tie-breaker.Credit:AP

On the far bigger Arthur Ashe Stadium last September, he dealt with raucous New Yorkers urging the tour’s self-proclaimed rebel on to a greater cause. Nick Kyrgios was his name.

By then the favourite to win the US Open title, the Australian was subdued early before launching a stirring comeback to force a fifth set. But the spoiler of hype held his nerve.

Another balloon burst. On that cool night in New York, Khachanov blunted the Kyrgios serve and defused a title threat.

Against Tiafoe, he weathered the ferocity of his forehand and silenced the chanting crowd. 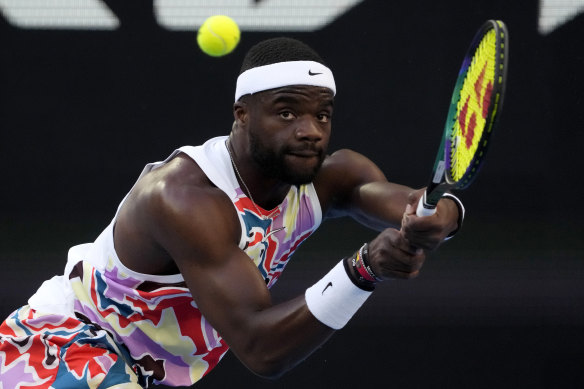 Khachanov, who conceded he was preparing for a fifth set when trailing 1-6 in the tiebreaker, said he did not mind the support the crowd provided for Tiafoe.

But he did have an issue with some elements of the behaviour, saying that cheering after double-faults was not necessarily fair.

“The other day, I beat a player from Australia. The crowd were not really pleased. I don’t know. But hopefully I can just keep on winning,” he said.

“To be honest with you, I like the atmosphere here … and every other crowd. But I just ask to show some respect for the crowd. To cheer after a double-fault … I don’t know.

The 18th seed broke Tiafoe’s serve at the start of the match in an early battle of wills.

His brilliance shone through at 4-3 in the second during a stunning exchange, ended with a backhand winner with both men at the net, that gave him the chance to break.

Tiafoe fought back in the third. That fired the crowd up again. But Khachanov held his nerve.

In setting up a last-16 clash against Yoshihito Nishioka, he has broken new ground in Melbourne after reaching the third round in the past four editions of the tournament.

The 26-year-old has won two of his three outings against the Japanese left-hander, though Nishioka did claim their last outing in Washington last year.

Khachanov has reached at least the quarter-finals of the other three grand slams and possesses a powerful serve, lively forehand, strong backhand and good movement.

But to establish himself as a legitimate grand slam contender, either in Melbourne or at the other majors in the future, there is another significant hoodoo he must overcome.

The top seeds have tumbled at this Australian Open but champions Novak Djokovic and Andy Murray and the highly talented Holger Rune and Andrey Rublev remain alive.

Three of them are ranked in the top 10. That is the problem for Khachanov, whose last win over a rival ranked in the elite subset came against Alexander Zverev in Montreal in 2019.

Since then he has lost 22 matches straight against top-10 players, which leaves his career head-to-head against the best of the best at 10 wins from 50 outings.