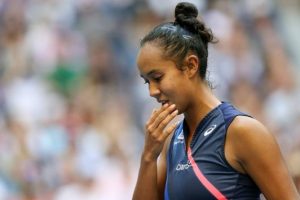 Tennis grand slams: Who is the greatest of all time?

Leylah Fernandez tearfully insisted that she was ‘proud’ of her performance in the US Open final after Emma Raducanu became the first British woman to win a Grand Slam singles title in 44 years with a seismic victory on Saturday evening. The 18-year-old, who had a world ranking of 150 going into the tournament, did not drop a single set on her way to glory and has earned her very own place in sporting history as a result of her incredible efforts in New York.

Raducanu started the match well, racing into a two-game lead in the first set before Fernandez broke back.

The London native kept her cool under the lights in the Arthur Ashe Stadium to hold her Canadian opponent at arm’s length and claim the spoils at her fourth set point.

She carried her momentum into the second set, quickly racking up a 5-2 advantage and earning a shot at a championship point.

However, she was unable to convert as Fernandes kept her foot firmly in the door to stay in the contest.

Raducanu then appeared to pick up a slight knee problem before returning to finish the job and remarkably clinch the US Open title in only her second Grand Slam appearance.

Fernandez was the crowd favourite throughout Saturday’s final and fought back tears as she congratulated Raducanu on her performance after the match.

The 19-year-old Canadian also declared that she was pleased with her US Open campaign despite cruelly missing out on the trophy at the final hurdle.

“It is incredible,” said Fernandez in her on-court interview.

“I have no idea what to say. Today is going to be hard but Emma played amazing. Congratulations.

“I am very proud of myself and having the New York crowd has been amazing. Thank you so much New York. Thank you everyone.”

Fernandez went on to thank her family before sending a message of support to the 23,000-strong crowd on the 20th anniversary of the 9/11 attacks.

“You are amazing with me when I had my lows,” she told her parents, who were in attendance at the Arthur Ashe Stadium.

“Thank you for always having my back and believing in me. I want to say I hope to be back here in the finals with the right trophy.”