‘Let them doubt’: Djokovic fires back over injury speculation

Novak Djokovic had heard the whispers echoing through the corridors of Melbourne Park and declared enough is enough.

After handing Alex de Minaur a lesson in grand slam tennis on Rod Laver Arena on Monday night, the world’s best return of serve continued to practise in the press room afterwards.

In the English section of his press conference, the nine-time Australian Open champion bunted back his returns when explaining how he was able to play at such an astonishing level and the lengths he was going to in order to manage the problem.

But he let rip when talking to Serbian reporters.

Suggestions he was foxing were rebutted with as much force as the backhand returns he blasted past de Minaur. Exaggerating the seriousness of the concern? He fired back with the ferocity of the forehands that put the 23-year-old from Sydney to the sword.

“I leave the doubting to those people – let them doubt,” he said in a story translated for the website Tennis Majors. 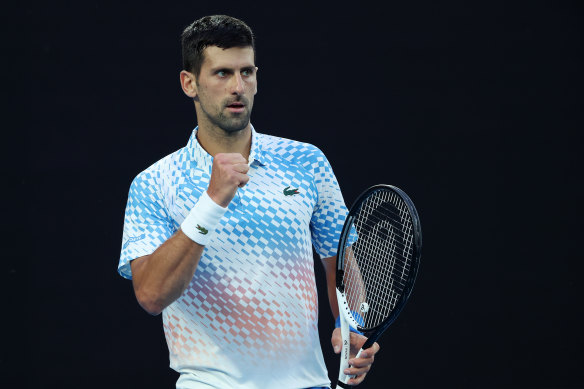 “Only my injuries are questioned. When some other players are injured, then they are the victims, but when it is me, I am faking it. It is very interesting… I don’t feel that I need to prove anything to anyone.”

The 21-time major champion has not specified exactly what the problem that first arose in Adelaide is.

But he said he had no interest in the speculation of pundits tasked with commentating on his bid for an extraordinary 10th title at Melbourne Park.

“I have got the MRI, ultrasound and everything else, both from two years ago and now. Whether I will publish that in my documentary or on the social media, depends on how I feel. Maybe I will do I it, maybe I won’t,” he said.

“I am not really interested at this point in what people are thinking and saying. It is fun, it is interesting to see how the narrative surrounding me continues, narrative that is different compared to other players that have been going through similar situations. But I am used to it, and it just gives me extra strength and motivation. So I thank them for that.”

It is accurate that the extent of the condition he is managing has been among the talking points of this Australian Open with good reason – he is the raging favourite with an unbeaten streak in this country of 38 matches. And some are incredulous.

A veteran coach with experience working with outstanding players said prior to his domination of de Minaur: “A hamstring injury? Spare me.”

Djokovic’s past is also a factor in the scepticism of some.

After tearing a stomach muscle against Taylor Fritz in a third-round clash in the 2021 Australian Open, Djokovic somehow won the Norman Brookes Challenge Cup, revealing afterwards the tear had grown from 1.5cm to 2.7cm in the second week of the major.

During an Australian Open final in 2015, Andy Murray was in disbelief mid-match when the superstar Serbian went from struggling to stand up to playing at a level similar to that he produced against de Minaur last night in the space of 20 minutes.

In the infancy of his career, Djokovic’s toughness was questioned by his peers when he melted in the heat in Melbourne. He has responded to become a mental master on the tour.

Former Australian Open finalist Marcos Baghdatis, who said he believed Djokovic was capable of continuing on until he was 43, stressed this prior to the 35-year-old’s clash with de Minaur.

“It is very complicated with his hamstring but the way he moves is still 100 per cent,” he said.

“When I watch him play, I don’t watch someone who is in big pain.

“For sure he has a hamstring injury. I am not saying he does not. But he finds a way to control it.”

Fritz was among those to comment after Djokovic dismissed those doubting him on Monday night.

“My opinion that probably nobody cares about [is that] 80 per cent of players are always dealing [with] something (severity levels differ) but everyone’s honestly always a little banged up,” he wrote on social media.

“[The] media is only ever focusing on the top guys so there issues get more attention.

“Also some players are more vocal talking about injuries than others. I don’t think people fake injuries. I do think sometimes players stretch the severity of the injury because it depressurises them and helps them play better (which honestly is fine, do whatever works).

“I don’t think it’s done in a bad sportsmanship kind of way, and before people get defensive, I’m not talking about anyone in particular. This is just what I see as a player, sometimes there [are] serious injuries, sometimes [they are] over exaggerated ones from people [ranked] 1-500.

“[I’ve] tried to make it as clear as possible that I’m not taking shots at anybody but [I’m] still expecting the hate messages from defensive fans.”

Daria Saville, who is currently sidelined with a knee injury, said Djokovic’s mental toughness enabled him to overcome injuries others would struggle to step on to the court with.

“Playing with a niggle, playing sore, even playing with chronic pain is not an injury,” she said.

“An injury, that’s something that’s causing you enough pain to stop you from competing. Trust me, I freaking know.

“Novak is a machine and he can probably tolerate more pain than others and on top of that I’m sure him and his team spend hours and hours working on his hamstring to get it better.”