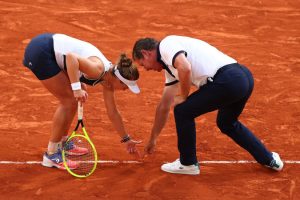 Paris: For a brief moment, an exhausted Barbora Krejcikova thought she had booked her place in the French Open final and she raised her arms in triumph. Unfortunately for the Czech, an incorrect line call by the umpire on match point put her celebrations on ice and she quickly realised that she had to do it all over again.

At 7-8, 30-40 in the decider of her semi-final against Maria Sakkari, the Greek hit a forehand that was called long by the line judge, only for the chair umpire to check the mark and call it in. 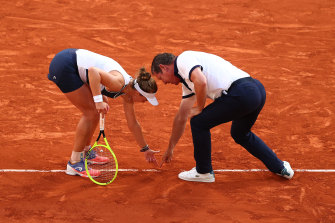 Barbora Krejcikova points to the court as she contests a line call with the umpire in her semi-final. Credit:Getty Images

Their argument has always been that umpires can easily spot the dent left by the balls to decide close calls. On Friday (AEST), however, that could have cost Krejcikova a place in the final.

“At that moment I was just like, ‘Well, it’s out, but what can you do?’ The chair umpire, he has seen it as in. What can I do? I cannot do anything about it. I cannot call anyone, change his decision.

The 25-year-old was also at a point where she felt simply being on court in such a match was enough and said she would have been proud of herself even if she had lost. 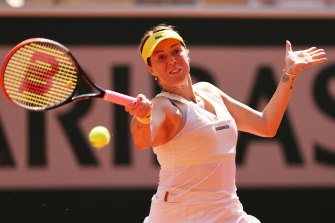 “It just took me some time, but I think right now it’s actually the right moment. Especially mentally I think I’m just there. I really matured. I just really appreciate things a lot, especially after what I’ve gone through, also with this pandemic and everything.”

When opponent Pavlyuchenkova won the Australian Open junior title in 2006, aged 14, it looked as though it would not be long before she would emulate the likes of Maria Sharapova and Svetlana Kuznetsova and start winning grand slam tournaments.

She has finally reached a major final in her 52nd appearance, beating Slovenia’s Tamara Zidansek in straight sets 7-5, 6-3 to move to within one win of French Open glory.

No other woman has taken so many attempts to reach a grand slam final, the previous highest number being the 44 it took Italian Roberta Vinci before she reached the 2015 US Open final.

That is not to say the 29-year-old Pavlyuchenkova’s career has been a let-down; after all she has 12 WTA titles to her name and has banked more than $10 million in prize money.

But until this year’s French Open her ceiling in majors had been six quarter-final runs, the first at the 2011 French Open when she led Francesca Schiavone by a set and 4-1 but lost.

Asked what her 14-year-old self would have made of it, Pavlyuchenkova said: “What would she have said? What took you so long? It’s tough to really talk about it right now.

“It’s been a long road. I had my own long special road. Everybody has different ways. I don’t know. I’m just happy I’m in the final.”