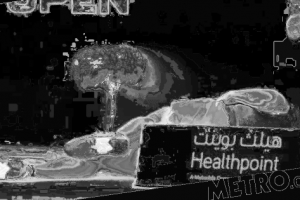 Kirsten Flipkens was forced to retire from her second round match with Australian Open champion Sofia Kenin on Friday after a freak clash with an advertising block at the back of the court.

Flipkens, the world No. 86 from Belgium who is still undergoing physio at the time of writing, had taken the first set of a competitive contest but was down a break in the second.

In the 10th game of the second set, with Kenin serving to level the match, Flipkens was forced back by a loopy forehand from the American.

She collided with an advertising block at the back of the court, rolling her left ankle in agonising fashion before ending dumped on the floor.

The Belgian swatted the block – which ironically had a company named ‘Healthpoint’ splashed on it – away and sobbed on the ground before receiving medical treatment.

Her ankle immediately swelled up on court and although she was able to walk on it, she retired from the match, sending Kenin through to the last-16.

‘This is f***ing s**t,’ said Flipkens, before having her ankle heavily wrapped and she hobbled off court.

‘You don’t see that happening in all matches. Today it was just really unfortunate.’

It certainly isn’t the first time players have clashed with the ill-advised boards.

Thanasi Kokkinakis, the Australian ATP player, tripped over a board in a defeat to Karen Khachanov at the Monte Carlo Masters in 2018 and called for them to be removed after the match.

In a slightly different, but more high-profile, incident David Nalbandian was disqualified from the final at Queen’s in 2012 after booting an advertising block that flew into the ankle of a line judge.