Johanna Konta remains ‘hopeful’ that Wimbledon can go ahead as planned but admitted she won’t look ‘too far ahead’ amid uncertainty on how the coronavirus crisis will effect the tennis world.

There will be no tennis until June 8 at the earliest, with Wimbledon scheduled to start 21 days later.

As it stands All England Club chiefs are planning for The Championships to run as planned, but it’s far from guaranteed the grass-court Grand Slam will take place.

The pressure for Wimbledon organisers to make a decision has only been ramped up after confirmation the 2020 Olympic Games in Tokyo will be postponed for a year.

Konta, the 28-year-old Brit who reached the semi-finals at her home Slam in 2017, is aware of the perils facing the British grass-court summer but is attempting to remain optimistic over Wimbledon going ahead.

‘I think more than anything it’s important to be hopeful, nothing wrong with being hopeful, equally, for me right now it’s about not looking too far ahead, we don’t know how it is going to develop,’ said British No. 1 Konta.

‘Now we know we are not playing until the beginning of June, that’s the date we are working towards, when that changes, if it changes, we react to whatever comes next.’ 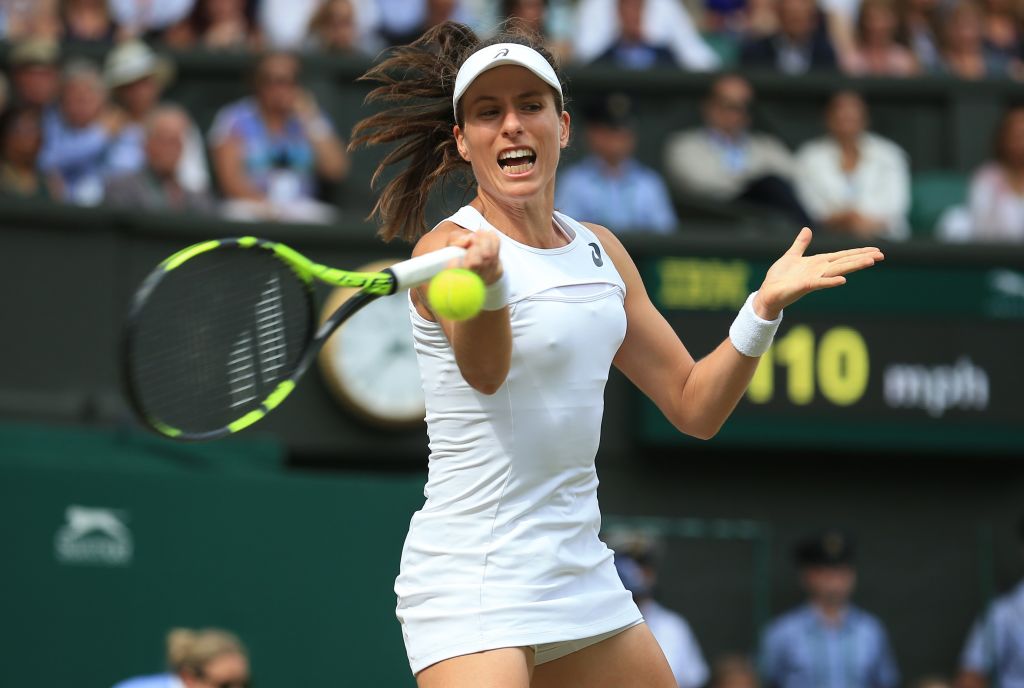 Konta is an active member of the WTA player council, which remains in discussion over what the best course of action to take is.

‘We’re in constant communication right now,’ added Konta. ‘But when the initial things happened, we were much more busy than now.

‘Now everyone knows that there’s nothing happening until at least until the beginning of June, it gives everybody a bit of breathing space, we can try to thrash out the best course for tournaments, players, everybody, obviously with rankings and all those sorts of things, there’s time to try to come up with the best solution possible.

‘It’s such a bad position in general, but we’re looking to find the best possible solution.

‘Everyone has been very accepting, tennis is such a global sport, everyone has come into contact with their own home nation’s governance and restrictions, the whole world is in the same boat, in Europe, US and Asia, everyone is very understanding about how everything is happening in the world.’

The male equivalent, the ATP player council – on which Roger Federer, Rafael Nadal and Novak Djokovic all sit, is understood to have disagreed over the best approach to take over the handling of the coronavirus crisis.

Djokovic is said to be keen to take a more hasty approach to cancelling events throughout the year, potentially even shutting the whole season down – something Nadal was against – while others were still, at that stage, hopeful the Miami Open, which was due to start on Tuesday, would go ahead.

Of course, events have now been scrapped until June and even practising will be difficult for many.

Konta had been training at the National Tennis Centre in Roehampton but the Lawn Tennis Association (LTA) closed it with immediate effect following prime minister Boris Johnson’s lockdown address to the nation.

Her coach Dimitri Zavialoff is in Switzerland for the foreseeable future and Konta will focus on fitness work at home, although she admitted the situation is not ideal as she continues to monitor an ongoing knee issue.

‘I can’t bring what I need into the flat. I need a leg press machine. That specific knee exercise, I can’t do right now.’

While Konta appeared on The Great Celebrity Bake Off for Stand Up to Cancer on Tuesday night, she admitted she will have to keep her baking to a minimum during her time in isolation.

‘I made a chocolate chip banana loaf, but it’s hard to eat all of it,’ added Konta.