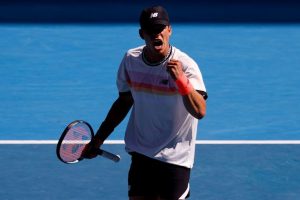 Novak Djokovic jokes about his age at the Australian Open

One of the biggest stories coming out of this month’s Australian Open is the remarkable rise of Ben Shelton. 20-year-old Shelton headed to Melbourne relatively unknown but a remarkable showing in just his second Grand Slam tournament has caught the eye of many.

Shelton has been a revelation in Melbourne, defeating Zhang Zhizhen, Nicolás Jarry, Alexei Popyrin and J.J. Wolf to set up a quarter-final clash with fellow American Tommy Paul on Wednesday. The American’s star’s journey to the final eight is an incredible one.

Prior to his trip to Melbourne, Shelton had never been out of the United States, but it seems his wait has been well worth it. At 20-years-old the world No. 89 has become America’s youngest player to reach a Grand Slam quarter-final since Andy Roddick in 2001.

His rise has been a meteoric one, having been ranked outside the world’s top 400 in July after attending the University of Florida. Tennis clearly runs in the blood of Shelton, after his dad Bryan broke into the top 60 in the world back in the 1990’s having competed at all four Grand Slam events.

Following his impressive run in Australia, Shelton admitted his lack of travel out of the States and his lowered expectations heading into the event could well have helped him. He said: “I got on the plane with no expectations. I know that it’s very hard to adjust to Australia from the United States with the jet lag, time change and everything.

“It being my first time, never being out of the United States, I knew it would be a struggle. But I think it maybe has helped me a little bit, not having that expectation or the feeling that I have to perform.”

Remarkably, the 20-year-old is balancing his hunt for a Grand Slam title with his studies, as he added: “I feel great. It’s been a pretty special week for me. Definitely a lot on my plate, playing my first Grand Slam outside of the United States, starting school this week. It’s been a lot. But I’m really enjoying it so far.

“Each match that I’ve won here has felt the same. It’s a mixture of joy, relief. I just have that feeling of ecstasy. When the last ball lands, I did it. To be able to do that on this stage four times in a row, that feeling over and over again, has been pretty cool.”