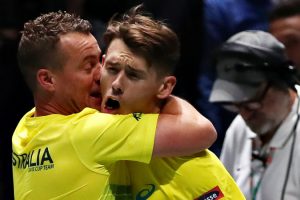 With the mystery behind James Duckworth’s omission from Australia’s Davis Cup squad resolved, captain Lleyton Hewitt is keeping his options open for the second singles player alongside Alex de Minaur.

Australia meet Croatia and Hungary in their group at the 18-nation event, striving to improve on a quarter-final finish in the revamped competition two years ago.

The decision on Australia’s best choice for singles action behind world No.34 de Minaur is not straight-forward – stalwart Millman or the emerging Popyrin? Nick Kyrgios, now ranked in the 90s, is also absent.

Said Hewitt: “We’ve still got a couple of days, so still working through that really. Right now as it sits though, I’d be very comfortable putting any of them on.

“I’m really happy with how they’re hitting the ball, and I’m pretty sure whichever person we put out there in the second singles and the doubles will play well. 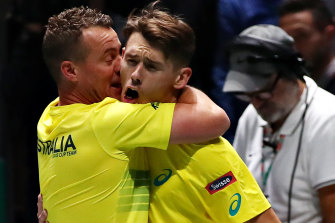 “They’ve done all the right preparation.”

While Bolt came into the squad last week as a medical replacement for Jordan Thompson (recovering from COVID-19), the absence of Duckworth, suddenly in the world’s top 50, had left tennis pundits and fans perplexed.

What appeared on surface-level to be an outright snub, however, was instead a little more complicated.

Hewitt has revealed that when a six-person Australian team was nominated after the US Open in mid-September, Duckworth – ahead of his eye-catching quarter-final finish at the ATP 1000 Paris Masters – wasn’t quite considered an automatic selection.

“When we picked a squad of six he was the number six in our team – when we had to announce the team straight after the US Open – basically off current form at the time but also rankings at the time,” Hewitt said.

“He had a fantastic finish to the year though, which we were extremely impressed with.”

Australia finalised their five-man team in late October but by then 29-year-old Duckworth had already settled on his plans for the rest of the year, finalised details for a return flight to Australia and quarantine in Adelaide.

In an impressive 2021 season after a career significantly impacted by injury, Duckworth reached the Wimbledon third round and has beaten Belgium’s David Goffin, rising Italian star Jannik Sinner and tough Spaniard Roberto Bautista Agut, elevating his ranking to a career-best 47.

“We actually were prepared to put him [Duckworth] in the final five before Jordan actually got COVID. We made that known to Ducks, [but] his decision wasn’t to come here [to Italy for the Davis Cup finals] at the time,” said Hewitt.

“That obviously [opened the door] for Alex Bolt to be able to come here, and be very versatile for the team.”