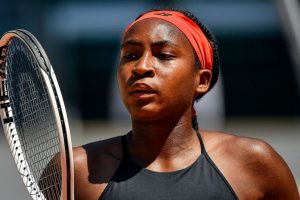 Tennis star Coco Gauff will not represent the United States at the Tokyo Olympics after testing positive for COVID-19.

Gauff announced her diagnosis Sunday on Twitter, saying she is “so disappointed” and she hopes “there will be many more chances” to play in the Olympics in the future.

Gauff, 17, last played earlier this month at Wimbledon, where she lost to Angelique Kerber in the fourth round. The world No. 25 previously said she was “super confident” about playing in the Olympics, which begin Friday with the opening ceremony.

Six British athletes are isolating in Tokyo after being identified as close contacts to an individual who tested positive for COVID-19. Two South African soccer players in the Olympic Village tested positive as well.