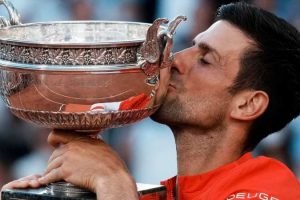 Novak Djokovic staged another trademark comeback as he claimed his second French Open title and 19th Grand Slam overall with a five-set victory over Stefanos Tsitsipas.

The world No 1 once again showed his exceptional powers of recovery to defeat Greek star Tsitsipas 6-7 (6-8) 2-6 6-3 6-2 6-4 to close to within one single title of Roger Federer and Rafael Nadal.

Tsitsipas saved a set point to win a compelling opener on a tie-break and looked to be cruising towards the title when he comfortably took the second, but Djokovic showed once again why he can never be written off, willing himself to another Grand Slam victory.

Djokovic said: “The atmosphere was amazing a few days ago against Rafa and today against Stefanos. Unforgettable matches, unforgettable moments for me, for my career, for my life. I’ll definitely remember this last 48 hours for the rest of my life.”

Tsitsipas won a seesaw opener after the Greek star won eight out of nine points in denying Djokovic the chance the serve out the set at 6-5 before sealing a dramatic tie-breaker under clear blue skies in Paris.

Djokovic’s excursions coming off an epic semi-final victory against old foe Nadal appeared to be taking its toll on him as the fifth seed, playing in his very first Grand Slam final, appeared to show no signs of nerves in running away with the second set.

The Serb’s back was up against the wall, but playing in his 29th Grand Slam final, he responded in typical fashion by claiming a marathon 11-minute fourth game to break Tsitsipas’ resistance, making just four unforced errors en route to sealing the set.

Tsitsipas took a medical timeout for a hip injury before the start of the fourth and he was immediately broken as 34-year-old Djokovic took over proceedings on Court Philippe Chatrier.

An audacious drop shot handed Djokovic a double-break and it wasn’t long before the top seed raced through the set to send the final into a decider.

Physically and mentally dominant. Hardest player in history to attack through the court. No holes in his game. No holes physically. Can’t break his mental belief …… Well deserved @DjokerNole

Two career Grand Slams @DjokerNole and 19 all up- congratulations on a memorable week in Paris and all the best for the grass. 🚀

Tsitsipas, who won the biggest title of his career in London when he claimed the year-end ATP Finals in 2019, appeared hampered on his backhand side as Djokovic broke for an early 2-1 lead.

He had one hand on La Coupe des Mousquetaires when he held for 5-3, but despite running on fumes, Tsitsipas still had enough in the tank to make Djokovic serve it out.

Under a crescendo of noise Djokovic did what he does best and play some clutch tennis to win the Roland Garros title with his second championship point after four hours and 11 minutes.