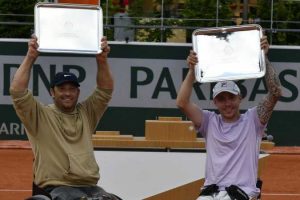 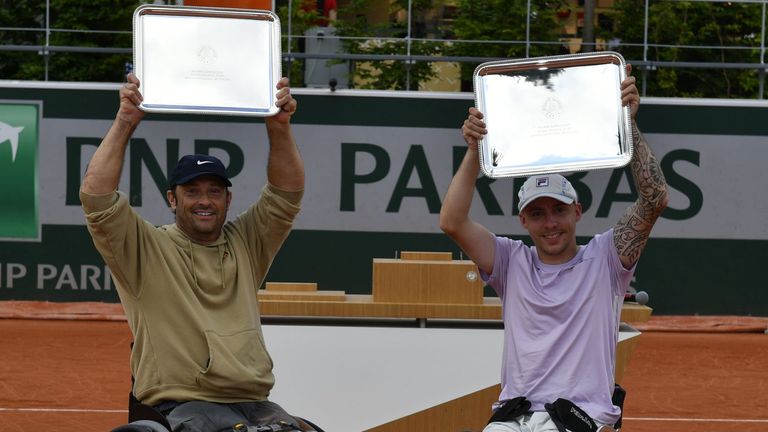 Before Britain’s Andy Lapthorne had even struck his first ball at this years Roland Garros, you knew he had a score to settle.

Already a multiple doubles title winner at the other three majors, there was just one missing from his collection with the clay courts of Paris being the only thing that had stopped him so far from achieving a career Grand Slam.

All that changed at the weekend. After clinching a tense match tie-break, together with doubles partner David Wagner, they came out on top against Dylan Alcott and Sam Schroder 7-6 (7-1) 4-6 10-7 in the quad wheelchair doubles final. Finally lifting the trophy and Lapthorne finally getting that “monkey off his back”.

“You know every now and then this game reminds you why you play and why you want to be here and why you compete so hard,” the British No 1 told Sky Sports. “It’s nice winning a Grand Slam, like I’ve forgotten what it feels like at times, and to win here is pretty special.”

Reflecting further on the win, Lapthorne believes going into the final as the underdogs also helped him in the crucial moments of the match.

“It was almost like poking the bear,” he said. “The late switch of doubles pairings as well really, really fired me up to go and prove a point.

“Being the underdog is fun because there’s no pressure out there and maybe it’s something that I need to look into and try and find that feeling and create that myself because when things are happening having that mentality seems to get the best performance out of me.”

As we’ve come to expect with this particular pairing, we were treated to some classic “Lappo and Wags” style tennis.

Lapthorne chased down balls on the baseline and showcased his lethal cross-court shot, giving his American partner space and time at the net to do some damage.

He said: “When we’re really together and battling hard I believe we’re tough to beat.

“David is so clutch in the big moments, he makes it easy for you – like 3-2 in that tie-break in this final he hits a winner down the line and he gives you a free point and breathing space. And with me, knowing that my fitness level is going to hold, that’s where we were back in the day.”

After last year’s Roland Garros, the two-time US Open singles Champion spoke openly about his mental health and took some time away from the court to reset.

And in the time between the Australian Open and the second major of the year in Paris he’s also been working hard on his physical and mental health to ensure he can keep playing to the highest level in the sport he is so passionate about, and has done so much for throughout his career to date.

“At times out there it felt like the old me and I haven’t had that feeling for the last 12 to 18 months,” he said. “There’s still areas to improve, still times where I can come forward, take the ball on one bounce and take the game to other team but baby steps.

“I mean the doubles final of Roland Garros last year during the 10-point match tie-break I was having a breakdown, this time I was in it and playing some decent tennis. The hard work I’ve put in has really paid off.”