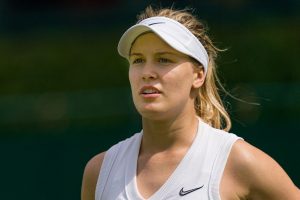 Ex-Wimbledon finalist Eugenie Bouchard has made the decision to pull out of this year’s event due to the WTA’s decision to scrap ranking points. The joint punishment from the WTA and ATP came in response to Wimbledon’s decision to ban Russian and Belaruisan players from competing following Vladimir Putin’s invasion of Ukraine.

The scrapping of ranking points has no doubt split opinion within the playing quota, however Bouchard has made the decision not to attend. The Canadian star reached the Wimbledon final in 2014, where she missed out on the title after defeat to Petra Kvitova.

Eight years on from her SW19 near miss Bouchard will not be there this time around, and confirmed the news via a post on social media. She tweeted: “Hi guys, quick update my end. I have decided to withdraw from Wimbledon due to the WTA’s decision to not award ranking points at this year’s championships.

She also outlined that a recent shoulder problem also played a part, adding: “Due to my shoulder surgery, I get a limited number of protected ranking (PR) entries. As much as I love Wimbledon and skipping it makes me sad, using a PR entry at a tournament with no ranking points doesn’t make sense.

“I must choose wisely and use my PR entries at tournaments that will help me get back to where I want to be. I am continuing my training and rehab and plan on returning to competition later this summer. I will now use my two Grand Slam PR entries for the US Open and the Australian Open.”

Bouchard is not the only WTA star who will be absent from the Grand Slam event, after Naomi Osaka also confirmed she would skipping the SW19 tournament. Osaka cited that the reason behind his withdrawal was down to an achilles injury, but like many the 24-year-old has previously spoken strongly about the lack of ranking points.

Discussing the matter last month, Osaka said: “The decision [on ranking points] is affecting my mentality going into grass. I’m not 100 percent sure if I’m going to go. I would love to go just to get some experience on the grass court, but at the same time, it’s like – I don’t want to say pointless, no pun intended – but I’m the type of player that gets motivated by seeing my ranking go up.

“I feel like if I play Wimbledon without points, it’s more like an exhibition. I know this isn’t true, but my brain just feels that way. When I think something is like an exhibition, I just can’t go at it 100 percent. I didn’t make my decision yet, but I’m leaning more towards not playing given the circumstances, but that might change.”