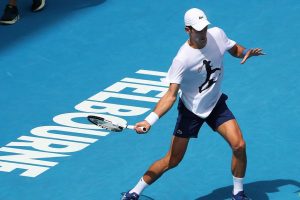 Alex Hawke has been urged to cancel Novak Djokovic 's visa and deport the tennis star by a man who has previously held a similar role.

The world number one arrived in Melbourne last week, but was held at the border for several hours until his visa was eventually cancelled and he was set to be deported.

Djokovic's lawyers delayed that deportation and forced a court hearing on Monday, at which a judge ruled in the nine-time Australian Open champion's favour.

The Serbian and his family celebrated and hailed the decision as a "victory", but there is still no guarantee that he will be able to play at the first Grand Slam of 2022 when it begins next week.

Australia 's Minister for Immigration has the power under the Migration Act to cancel Djokovic's visa anyway, despite the judge's ruling.

New Zealand's former immigration minister Sir Kerry Burke has weighed in on the situation, urging Hawke to override the court decision and cancel the visa anyway.

"Federal Immigration Minister Alex Hawke has the power, under Australian law, to cancel Novak Djokovic's visa. No amount of comment by Judge Anthony Kelly can deny the minister's power," he said, per the Sydney Morning Herald.

"If the law requires everybody entering Australia to have two Covid-19 vaccinations, with appropriate time separation between the first and the second.

"If Djokovic cannot meet this test, then his attempt to stay in Australia must fail. That will be minister Hawke's call and it should be made."

Djokovic is set to get at least another day Down Under, with no decision having yet been reached by the Department of Home Affairs.

Hawke's office confirmed on Tuesday afternoon (local time) that the minister is still weighing up his options and that no final decision had been made.

"In line with due process, minister Hawke will thoroughly consider the matter," a spokesperson said.

"As the issue is ongoing, for legal reasons it is inappropriate to comment further."

One source of contention in the decision is said to be the possibility that false information might have been provided on Djokovic's visa application form.

The official document, submitted on January 1, asked the Serbian: "Have you travelled or will you travel in the 14 days prior to your flight to Australia?"

Djokovic answered 'no', but the federal government is said to be investigating whether or not that was true.

The Serbian is also under fire after his lawyers argued that he had tested positive for Covid on December 16, but a photo has since emerged of the tennis star posing for photos with a group of children a day later.

When asked about that photograph, Djokovic's brother Djordje hastily called an end to the press conference and gave no answer.