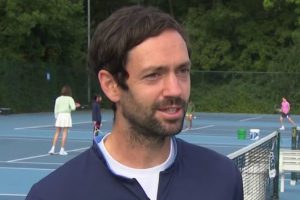 Speaking to Sky News on Sunday former coach Matt James expressed how “immensely proud” he was to see his former student win the US Open in what he deemed was a seismic moment for British tennis. His comments come as world No 150 Ms Raducanu beat 19-year-old Leylah Fernandez 6-4 6-3 to polish off a perfect fortnight of tennis in New York. Ms Raducanu was seen collapsing after smashing home a serve to win the US Open becoming the first British woman to win the competition in 44 years.

Matt James said: “It is tough to put into words, to be honest, obviously immensely proud as well and just excited of what could come from this.”

He suggested Ms Raducanu’s huge success could not only do wonders for her own career but also inspire a raft of younger players to pick up rackets as well as spur on the current British crop of players who have witnessed how she has catapulted herself.

He added: “It is a real buzz around British tennis and the LTA (Lawn Tennis Association) at the moment.”

The former coach went on to say that despite knowing Ms Raducanu was more than capable of achieving great things he admitted he didn’t think such a meteoric win would come “so soon” at only 18 years old.

Mr James added how he felt the tennis champion up until now was “under-ranked” and a “little bit off the radar” of the general public and tennis observers due to her age and requirement to finish her A-Levels.

He also added how a turning point in Ms Raducanu’s career was at Junior Wimbledon three years ago where she played against Ms Fernandez, her opponent in Saturday night’s US Open final.

Mr James said: “You saw the same mindset, the same gritty determination and she was only 15 back then. Just how she played, it was a breath of fresh air.”

Ms Raducanu’s win means she is the first British woman to win a major final since Virginia Wade won Wimbledon in 1977 and is also the first woman to win a title in just her second appearance at a major.

Speaking after the historic win, an ecstatic Ms Raducanu said: “First of all, I really want to congratulate Leylah and her team, she played some incredible tennis and has beaten some of the top players in the world.

“The level was extremely high and I hope we play each other in many more tournaments and hopefully finals.

“As for this three weeks in New York, I would say having such a supportive team, the LTA my agent, and everyone back home watching on TV, thank you so much for your support over the years.

“Thank you for making me feel so at home from my first qualifying match, you have spurred me on in some difficult moments and I hope me and Leylah put on a good match today.”

But her win didn’t come without drama, as she slipped while serving for the match and needed a medical time out, grazing her knee and bleeding as Fernandez set up a break point.

The Briton was able to save two break points in the final game of the match and serve out an unprecedented victory.

Neither Ms Raducanu nor Ms Fernandez had ever played a competitive match against each other on the WTA tour before Saturday night’s extraordinary clash but they had played each other at the Junior Championships, Wimbledon two years ago.

Ms Raducanu, who only finished her A-Levels in July, pocketed an eye-watering £1.8million prize money for her historic win.