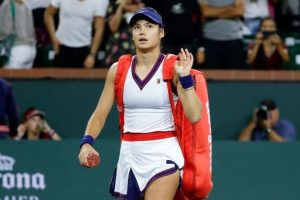 Teen tennis sensation Emma Raducanu was one of tennis’ big movers in 2021, following a remarkable breakthrough campaign on the WTA Tour.

Raducanu became an overnight sensation back in September as she broke nearly every record in the book on the way to winning an historic US Open title at Flushing Meadows.

The 19-year-old became the first ever qualifier to win a Grand Slam event, remarkably completing the feat without dropping a set all tournament.

Understandably Raducanu made a meteoric rise up the WTA rankings, moving an incredible 324 places throughout the calendar year to become British No 1.

After beginning the year ranked 348th in the world, the Brit now sits inside the top 20 in 19th, with only three other players making bigger rises in the world of tennis.

Following her remarkable year that saw her rise to fame the 19-year-old took to Instagram to thank her fans and team for their support in 2021, adding that she is ‘motivated’ for her ‘next steps’ heading into the New Year.

She wrote: “I want to say thank you & that I am extremely grateful for your generous support.

“I’ve learnt many things at a fast pace on this incredible journey but all I can say is that I am very excited and motivated for my next steps.

“I feel I can put in great work together with my team, with patience I believe we’ll get there.

“Huge thanks and big appreciation to my team & people who have supported me! This wouldn’t have been possible without you. Love Emma.”

As well as Raducanu there were also three other big movers in Carlos Alcaraz and Juan Manuel Cerundolo in the ATP, and Ana Konjuh in the WTA rankings.

Cerundolo is the man who made the biggest move in the men’s game, as he impressively climbed from 349th in the world to 89th thanks to an impressive year from the Argentinian.

Whilst Croatian star Konjuh was the largest mover on the WTA tour, as she jumped a mammoth 472 places in the rankings from 538th to 66th.

Like her WTA counterpart Raducanu, Konjuh also took to Instagram to post a message summing up her 2021 successes, revealing she was ‘excited’ for what was to come in 2022.

Konjuh wrote: “Well that’s a wrap for season 2021. It’s been a challenging year and a long road back but finally in the top 100 again so safe to say comeback was successful.

“Now time to recover, rest and get ready for the next season. Excited for what’s to come. Thank you for all your support.”